Picturing gender equality in Viet Nam through comics and cartoons

Ha Noi, Viet Nam – “My cartoon portrays inequality in the working environment, where gender is never an official criteria but it secretly has influence over chances of recruitment and promotion”, said Ms. Nguyen Vu Xuan Lan, the first prize winner of the “Comic and Cartoon Contest: Gender Equality – Picture it!”, and a 25-year-old English teacher. “The man in the middle is inspired by the image of God of Justice. He's the one with authority and is supposed to be impartial, but as you can see, he's cheating and showing his preference toward the male employee. I wanted to emphasize the attitude and action of the one keeping the scale. I think it's pretty sad for the country, that we are rejecting talented people and their potential just because of their gender”.

Xuan Lan’s cartoon is one of 40 being exhibited at the Vietnamese Women’s Museum from the contest organized by the Embassy of Belgium, the Belgian Development Agency and UN Women Viet Nam. The contest invited Vietnamese nationals aged 18 and above to picture how gender equality looks like through cartoons and comics without words. In total, 116 applications were received from across the country, each portraying the applicants’ understanding of gender equality and women’s empowerment. Many images also highlighted various gender equality challenges in Viet Nam including violence against women, persistence of son preferences as well as discrimination against women and girls in education, work, and various spheres of life.

Speaking at the awarding ceremony of the contest in March which coincided with commemoration of International Women’s Day 2016, Mrs. Jehanne Roccas, Ambassador of the Kingdom of Belgium said: “I am happy that about half of the 116 drawings were submitted by women. The quality was so high that I thought we could never make a choice! Even without words, drawings made us laugh, think and cry.” “Art and media are powerful instruments to promote gender equality. Patriarchal attitudes and gender stereotypes contribute to treating women as subordinate members of the family or society. They also affect how women are treated and perceived by public institutions and societal structures. These cartoons capture the effect that the negative gender stereotypes and social norms have on women, and tell a story that strongly resonates with many people in Viet Nam.” said Ms. Shoko Ishikawa, UN Women Country Representative in Viet Nam at the ceremony.

Questioned about the role of artists in achieving gender equality, Xuan Lan continued. “As we always say: ‘A picture speaks a thousand words’, works of art are able to demonstrate multiple angles of inequality and deliver messages in a more direct, more impressive and still friendly way, and encourage the public to absorb knowledge and information about the issues more easily. This is where we see the role of artists.”

The contest was received with high interest from the public. During the 3 week public voting period, pre-selected artworks received over 10,000 votes and reached over 250,000 people on social media. The top 3 winning images received 3,110 Likes and generated hundreds of conversation on social media and beyond. The exhibition at the Vietnamese Women’s Museum in Hanoi that was scheduled to run only for 10 days has been extended in response to positive comments received from museum visitors. The museum is also considering adding the cartoons to their permanent exhibition. 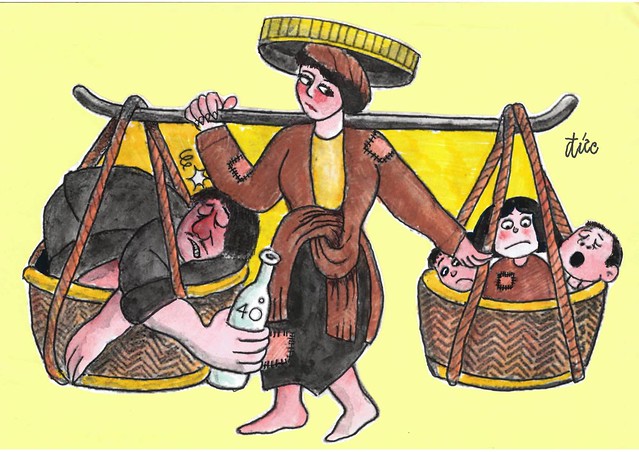