The nationwide ceasefire from a gender equality and women's rights perspective 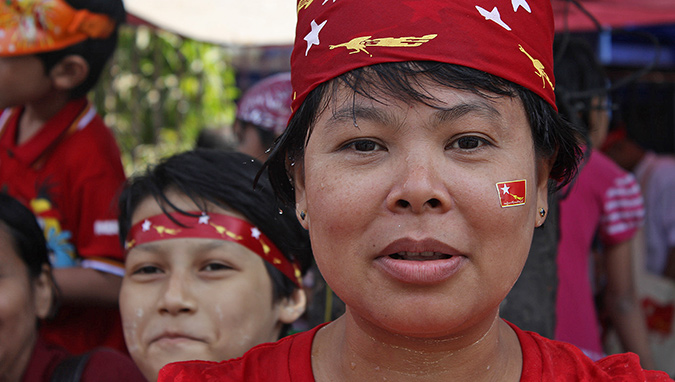 Drawing on the perspectives of women in conflict-affected areas, the publication highlights the different impacts of conflict on women, men, girls and boys, with women and children bearing a heavy burden. Women have nevertheless demonstrated resilience and made rich contributions to peace. However, they constituted only two out of 32 (6 percent) of the government and ethnic armed organisation teams and two out of 15 (16pc) of the senior delegation charged with negotiating the NCA. This represents a shortfall of eight and three women, respectively, to meet the 30pc minimum standard for women’s participation as set out by the Convention on the Elimination of all forms of Discrimination Against Women, but signals progress from a pre-reform baseline of zero.

Gender stereotypes that construct men in public sphere roles as leaders, strategists and combatants, while women are domesticised; a perception of women as lacking understanding of military strategy and conflict and thus as marginal contributors to peace; and a perception of ceasefire negotiations as combatant-to-combatant talks that include only conflicting parties who are predominantly male, all contribute to marginalising women.

With few examples worldwide, Myanmar’s NCA stands out globally as an illustration of gender inclusivity in a ceasefire agreement. It has three provisions promoting women’s rights. The basic principles guarantee that in implementing the ceasefire agreement, no citizen will be discriminated against, including on the basis of gender. It provides that sexual assault on women must be avoided as a civilian protection measure. Finally, the NCA ensures women’s inclusion in the political dialogue. These guarantees provide concrete commitments to protecting women’s rights in progressive compliance with the Convention on the Elimination of all forms of Discrimination Against Women, UN Security Council Resolution 1325 and Myanmar’s National Strategic Plan for Women’s Advancement. 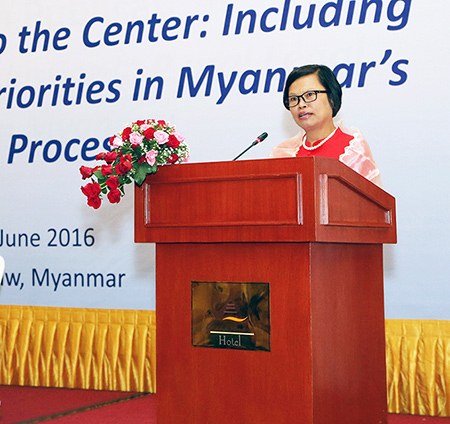 But the UN Women’s report also analyses the NCA’s limitations from a gender perspective. The NCA does not regulate military activities – including troop movements, positioning and conduct – in a way that considers a range of socioeconomic, physical and sexual impacts on women. These include the appropriation or destruction of women’s property; hostile acts or defamatory speech against women; troop presences in spaces that women frequent; the impact of military confrontations on civilians, including the safety and security of women and girls; and prosecuting perpetrators of all forms of violence against women.

Women’s NCA protections as civilians is limited to specific types of sexual violence. It excludes physical, psychological or economic violence such as forced marriage, human trafficking, forced labour, and appropriation or destruction of women’s socioeconomic assets and livelihoods. There is no express prohibition on amnesty for the conflicting parties and entities they control if they have violated women prior to or after the agreement was signed. There are no provisions for redress, reparations and accountability for discrimination and violence against women and girls, although there is opportunity to incorporate accountability provisions into the terms of reference for the Joint Ceasefire Monitoring Committee.

Provisions on improving livelihoods “for people” and avoiding impeding an “individual’s” right to health use gender-neutral language and do not refer to men, women, boys and girls separately. This may adversely impact women’s and girls’ rights. For example, without clearly mentioning women’s right to health, issues like sexual and reproductive health or violence-related injuries that only apply to women and girls could be overlooked.

Humanitarian assistance provisions do not consider the distinct needs of women and girls, as refugees or internally displaced persons, in ensuring their safety, security, resettlement needs, access to employment and land rights. The verification processes for internally displaced persons and refugees must also consider the special circumstances of women, including those heading households and with no identity documents. Women are not guaranteed participation in ceasefire monitoring mechanisms and women’s involvement in the political dialogue does not assure their representation in leadership roles?

These challenges must be overcome to ensure women’s full involvement in Myanmar’s peace process. The report recommends women’s inclusion in all structures of the JCMC. The committee should monitor NCA implementation to ensure gender-based non-discrimination and address sexual violence as a ceasefire breach, investigating and prosecuting perpetrators speedily under national law. Reports from women’s organisations monitoring aspects of ceasefire implementation should inform the JCMC’s work.

Other provisions that can advance women’s rights include rights to land, education, healthcare services and humanitarian assistance. Women should be included in all structures, at all levels of the political dialogue, and constitute at least 50pc of community consultations. Ceasefire provisions and civilian protections should be strengthened when the ceasefire is made permanent. All thematic issues in the political dialogue must be addressed from a gender equality perspective.

A comprehensive, gender-sensitive peace accord would enhance the inclusiveness and sustainability of peace and development in Myanmar.

The article was originally published by The Myanmar Times.