Vientiane, Laos — As poor Lao villagers cross into Thailand to start new lives as migrant workers, they can soothe some of their worries by carrying in their suitcases a colorful, friendly UN Women booklet.

UN Women's Safe Migration Booklet, which features the always-upbeat Thai cartoon character Noohin (Little Hin), tells the migrants everything they need to know to make their journeys smooth and trouble-free. 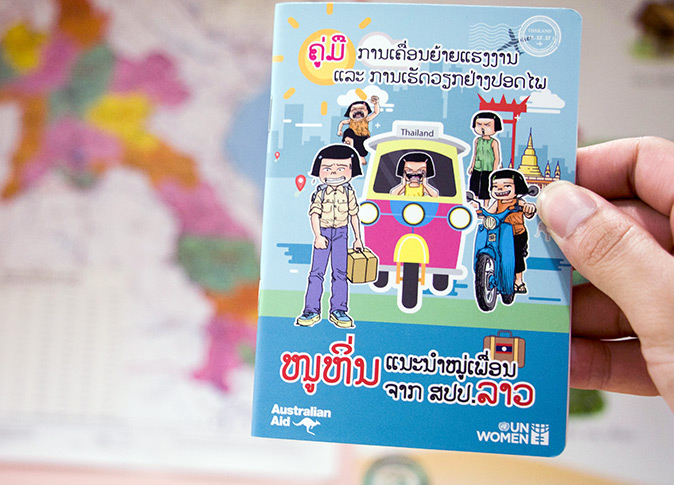 The Safe Migration Booklet is displayed on a rack at the Vientiane office of Village Focus International in October. Photo: UN Women/Yoomi Jun

In Lao and Thai, the 48-page booklet tells you how to get proper work documents, the cost of living in Thailand, where to go if you get sick there, a hotline to call if you get into trouble, your rights under the Thai labour law, the dangers you should watch out for such as human trafficking, labour exploitation, sexual harassment.

Often, it's simply scarcity of this kind of information or lack of access to it that makes migrant workers so vulnerable to exploitation. UN Women's booklet not only provides the most up-to-date information, but in a style and format that's easy for migrants to read, unlike the overly technical and complex materials often put out by governments.

"I believe this booklet will help others who are in the similar situation as I am," said a young woman at a shelter in Vientiane for victims of human trafficking when she was asked about the quality of information the booklet contains.

The booklet attracts readers by featuring Noohin from Thailand's well-known comics series Kai Huorok, or Laughter for Sale. In the series, Noohin travels from a rural area of Thailand's poor Northeast region to work in Bangkok as a domestic worker. The parallels with young Lao migrants are clear, although unlike the stereotypes of migrant workers, Noohin exudes fun, speaks her mind, and is upbeat about her job. To spread her positive energy, UN Women recently appointed Noohin as UN Women Thailand's Gender Equality Champion. 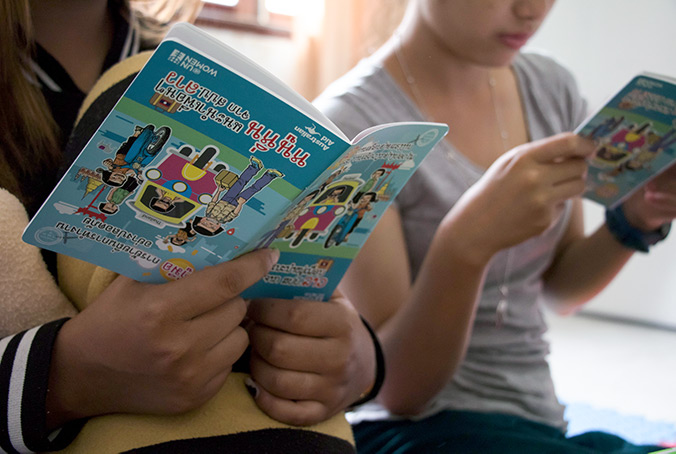 Two Lao, ages 17 and 18, read the Safe Migration Booklet at the shelter for victims of trafficking in Vientiane. They had worked at a banana plantation in Thailand.Photo: UN Women/Yoomi Jun

There are 9.9 million foreign migrants in the 10 countries of the Association of Southeast Asian Nations; of them, nearly 6.9 million are from other ASEAN countries. According to UN Women's recent study Women Migrant Workers in the ASEAN Economic Community, women make up a big share of this labour force but many cannot enjoy their rights and entitlements because they have limited access to information.The International Organization for Migration said in a 2016 publication that some 300,000 Lao migrants work in Thailand, legally and illegally; that's half of all Lao migrant workers globally. It said their remittances account for 25-50 per cent of the income of rural households in Laos. A majority of them work in households or in wholesale and retail.

"Many women migrants choose to migrate after listening to the story of a friend or other members in the village who have returned from Thailand," said Konseng Pienpanya, Programme Coordinator for Village Focus International, a non-governmental organization in Laos. "It is easy to make the decision because they can see the money other migrant workers bring back home. And those who return offer networks and connections for others to easily migrate."

Thailand requires that all migrant workers legalize their status before arriving, but the high costs of registration and official documentation discourage many Lao from doing so. Some female migrants take their children along, putting them all at greater risk of human trafficking. Without documentation, migrant workers cannot obtain proper social or medical services or legal protection and become easy targets for traffickers. Women and girls are the most vulnerable.

The Safe Migration Booklet was published in October 2017 as part of UN Women's Regional Migration project, which is funded by Australia's Department of Foreign Affairs and Trade. A total of 10,000 copies are being distributed at immigration checkpoints along the Lao-Thai border and to civil society organizations, and the United Nations agencies that will in turn distribute them more widely in both countries.

Related News
21/06/2021
Keomouangluang’s journey: From migrant domestic worker to mushroom entrepreneur
09/12/2020
“It is more important than ever that women migrant workers know where to get help.”
01/02/2022
In the words of Tarikul Islam
22/12/2021
Cooperation Key to Ensuring Rights-based Migration in Asia-Pacific
30/11/2021
Knowledge Hub on Labour Migration in South Asia Launched
END_OF_DOCUMENT_TOKEN_TO_BE_REPLACED