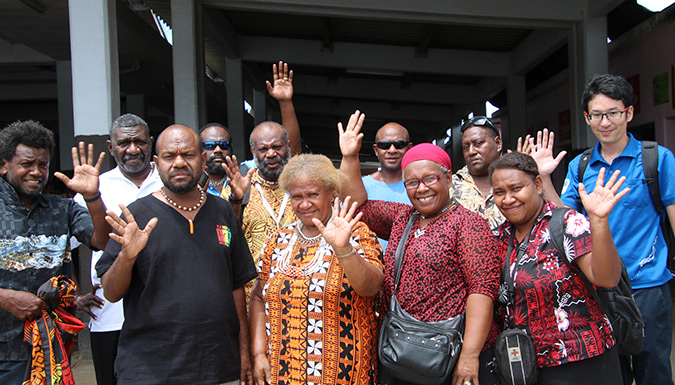 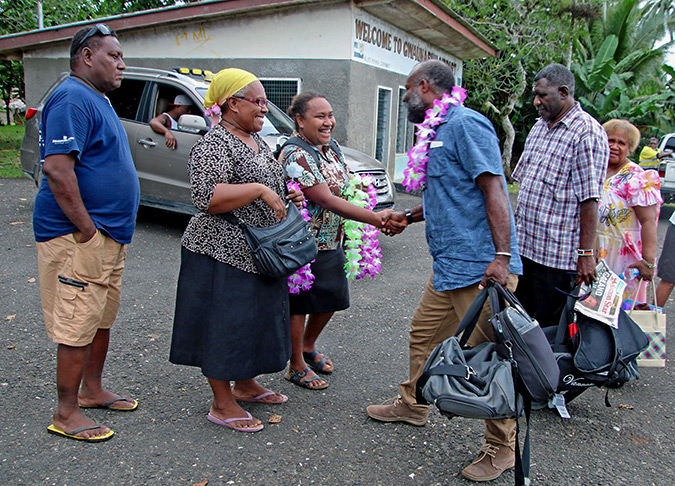 Over the past fortnight, three Solomon Island and five Vanuatu delegates travelled each other's countries as part of a South-South Exchange. The exchange, run through UN Women's Markets for Change (M4C) project, hopes to strengthen the knowledge and capacity of marketplace decision-makers across the region to advance gender equality.

From 23-26 January, the teams were touring markets and attending workshops in Solomon Islands, and from 29 January to 2 February, the teams switched places. Travelling to Vanuatu, the Solomon Islands delegates were inspired by their Vanuatu counterparts' ideas on how to improve marketplaces for women.

From Port Vila to Luganville, the team toured Vanuatu marketplaces. They learned how market management and Market Vendor Associations are handling critical issues for women vendors, such as financial literacy, food hygiene, management and operations.

"In Auki, we do not have a proper composting system within the market area to absorb the market wastes which can also be used as an income source. From this learning exchange, I have been able to learn about the segregated waste management and composting system in the Vanuatu markets which I would like to implement in Auki,"says Betty Kwanairara, Auki Market Manager.

"It was also interesting to learn about the different vendor registration and market management systems in Port Vila, Luganville, Marobe and Shefa ring-road markets," added Betty.

"I am really happy to see that our Solomon Islands counterparts have found our waste management system helpful and aiming to replicate this in Auki market," says Hon. Onen Gaviga, Lord Mayor of Luganville. "I am also grateful to UN Women M4C for enabling the Luganville Municipal Council to be part of this exchange as we have learned a lot from the Solomon Islands which will help improve our market in Santo."

"I learned a lot from the exchange to Vanuatu and I am grateful to the leaders for taking their time to show us how the local governments with support from Vanuatu's Market Vendor Associations (MVAs) are working to make marketplaces safe and empowering spaces for women," says Clera Rikimani, Women's Development Desk Officer of Malaita Provincial Government, Solomon Islands.

"It is the relationship from government to government, regardless of positions, that truly matters and this paved the way for the councils and market managements to strengthen themselves through their learnings from each other," she added.

The idea for the South-South Exchange resulted from the 2016 Markets for Change Regional Stakeholder Forum held in Nadi, attended by representatives from all three M4C countries: Fiji, Solomon Islands and Vanuatu.

UN Women's M4C project is a six-year, multi-country initiative that aims to ensure marketplaces in rural and urban areas of Fiji, Solomon Islands and Vanuatu are safe, inclusive and non-discriminatory, promoting gender equality and women's empowerment. A UN Women project, M4C is principally funded by the Australian Government, and implemented in partnership with UNDP.

Between 75-90 per cent of vendors working at Pacific marketplaces are women and their earnings often make up a significant portion of the incomes of many poor households. Despite this, women are often excluded from market governance and decision-making. M4C works with stakeholders, service providers and the market vendors themselves to: build and support inclusive, effective and representative advocacy groups; deliver appropriate services, training and interventions; ensure women's voices are heard and taken into account at the decision-making level; and to improve physical infrastructure and operating systems.