Prey Veng and Kompot, Cambodia — Local administrations in Cambodia are planning to incorporate into their climate change risk reduction plans the ideas contributed by female leaders who received training under a United Nations project. 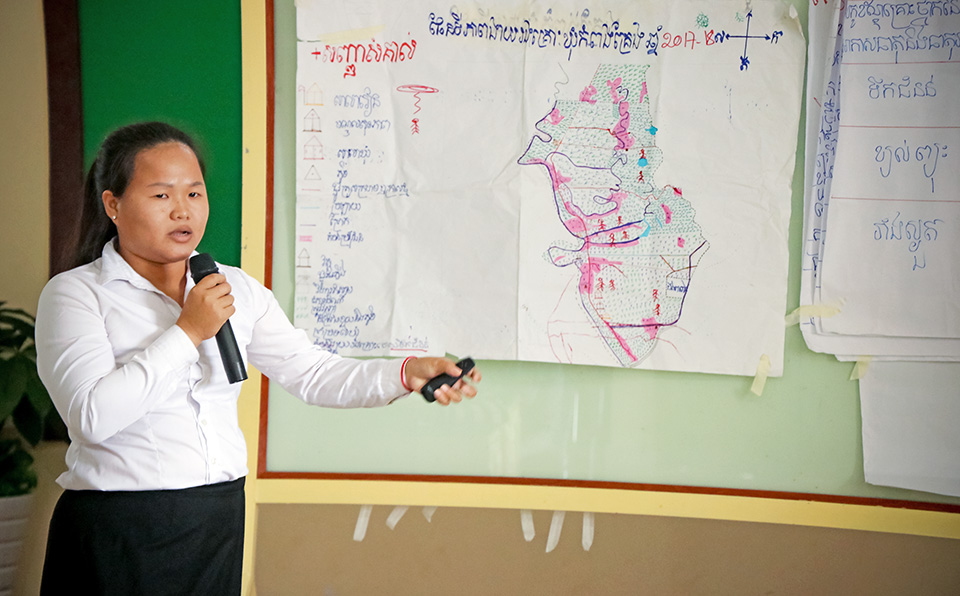 Local authorities discussed the plans with women’s and civil society groups on 17 and 19 October in two provinces, Prey Veng and Kompot.

The United Nations Democracy Fund project is aimed at encouraging female leaders in rural communities to come up with strategies to reduce climate change risks and strengthen local government policies on this. The project targets about 80 women in four vulnerable provinces; the other two are Battambang and Preah Vihear. UN Women was asked to monitor the project, which began in May 2017 and lasts until April 2019; the independent Cambodia Development Resource Institute (CDRI) is implementing it.

During the October consultations in Prey Veng and Kompot, women’s groups presented their climate change action plans to commune, district and provincial authorities. The plans are to be incorporated into Commune Development Plans.

“Climate change is one of the factors causing women’s migration and domestic violence in the community. So we have to stop it by supporting one another in the community through the project’s capacity-building, which allows women to gain knowledge and understanding not only about climate change but also about budgeting and planning for other upcoming projects of the community,” she said.

Khhem Phorn, a member of Reak Chey commune council in Prey Veng, said she learned the words “climate change” for the first time in the United Nations project training. Before, she had no idea what it was and what caused it. She said she learned how to use two important research approaches--Participatory Action Research and Vulnerability Reduction Assessment--to document best practices for women’s adaption to climate change.

Chrem Vutha, a member of secretaries of the Provincial Committee for Disaster Management in Kompot, said women’s groups and commune councils should collaborate with the district governor to make sure the action plans are included in the Commune Development Plans and Commune Investment Plans in 2019.

Eng Lyhouy, 22, a women’s group member from Kompong Kreng Commune in Kompot, said the training increased her self-confidence and her understanding about climate change, and she is now able to teach other women how to adapt to climate change.

She said that during the consultation meeting, her team proposed small projects on saving for buying and selling rice and on food processing. The local authorities replied that the plans did not contain enough detail and needed to be revised.

“We are happy with the feedback and willing to adjust for a better and successful project plan,” Eng Lyhouy said.