Bangkok, Thailand — Numbers often tell a story, but when it comes to gender issues, data is often missing or misunderstood. Where gender data does exist, and it is presented effectively to paint a vivid picture of gaps and progress, it can be an important driver of development projects and initiatives for social change. 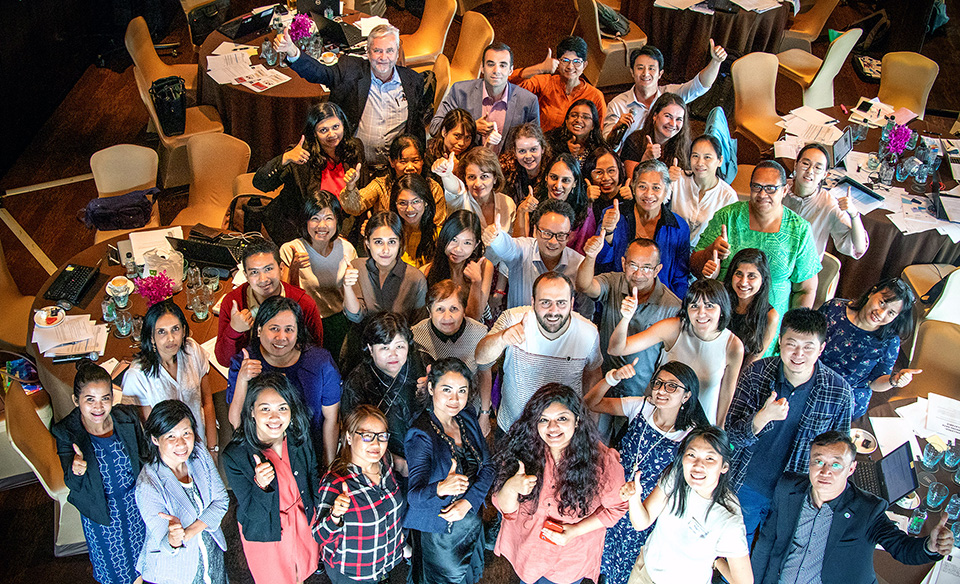 To encourage and expand the use of data in reporting gender stories and accomplishments, 25 participants from eight countries in Asia-Pacific took part in a Workshop on communicating gender data: promoting better use and delivering impactful messages. Jointly organized by UN Women’s Gender Statistics team and the Statistical Office of the UN Economic and Social Commission for Asia and the Pacific (ESCAP), the three-day workshop was held in Bangkok from 11 – 13 June. 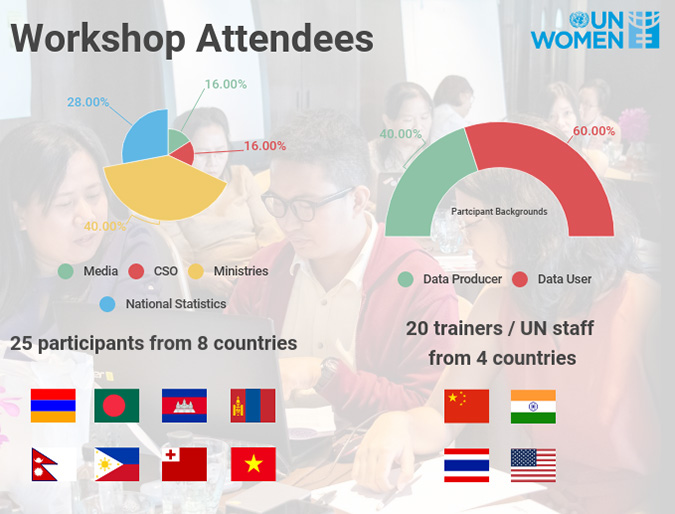 “The Daily Star, “[We] learned how to create the visuals, how to access the gender data, how to communicate it effectively and inclusively.”

Participants from varied backgrounds – ranging from data users and producers from government ministries, to media, civil society and special interest groups – gathered to discuss various challenges to communicating gender data. Work sessions detailed tips for finding gender statistics, ways to improve story-telling through infographics and visualization, tools to make gender statistics more accessible, as well as how to build a good gender-focused media story. The workshop culminated in participants proposing solutions to identified challenges in communicating gender data, applying their new knowledge to specific gender statistics that each participant selected from their own countries, as well as creating a communications strategy.

Leading several sessions on best practices was UN Women’s Statistics Specialist Sara Duerto Valero. She often works with national statisticians and has found that “gender data is actually available in most countries; the problem is that it remains heavily underused … We are witnessing lots of data waste because most producers lack communication strategies, so people don’t know where to find the data, how to interpret it, or that it even exists.” 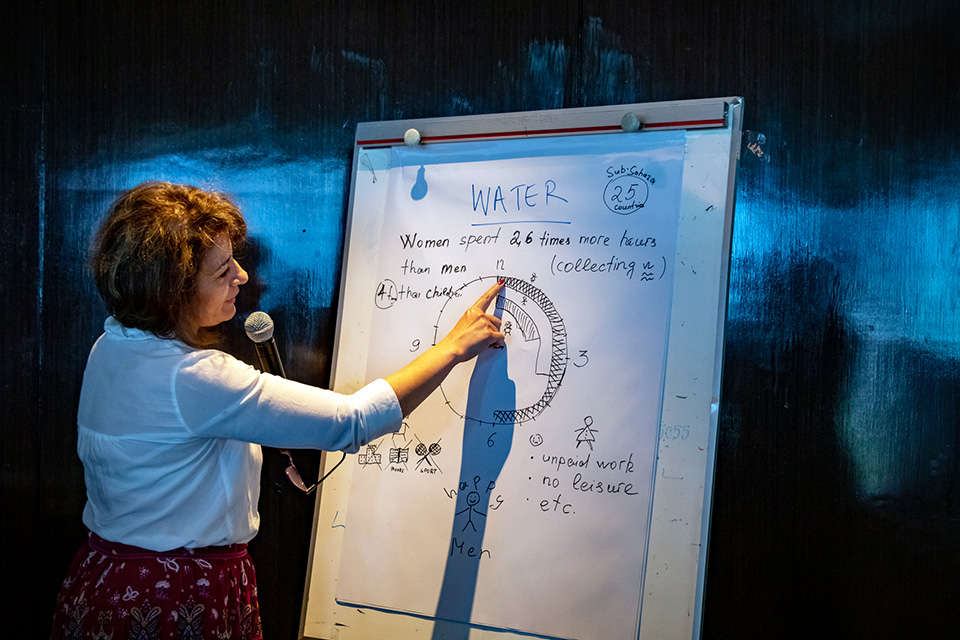 To address some of these challenges, sessions specifically addressed how to access gender data and ways to better communicate that information.

Another challenge identified by participants was the lack of context for data stories. UN Women’s Digital and Interactive Media Specialist Jaya Jiwatram led a session on Visualizing Gender Data, noting: “Data is all around us – and on its own, it means nothing. Context is everything. Whether as data providers, researchers or journalists, we all have a role to play in unpacking that story hiding in the data to drive positive societal change.”

In fact, one of the goals of the workshop was to equip participants with the skills to do just that. 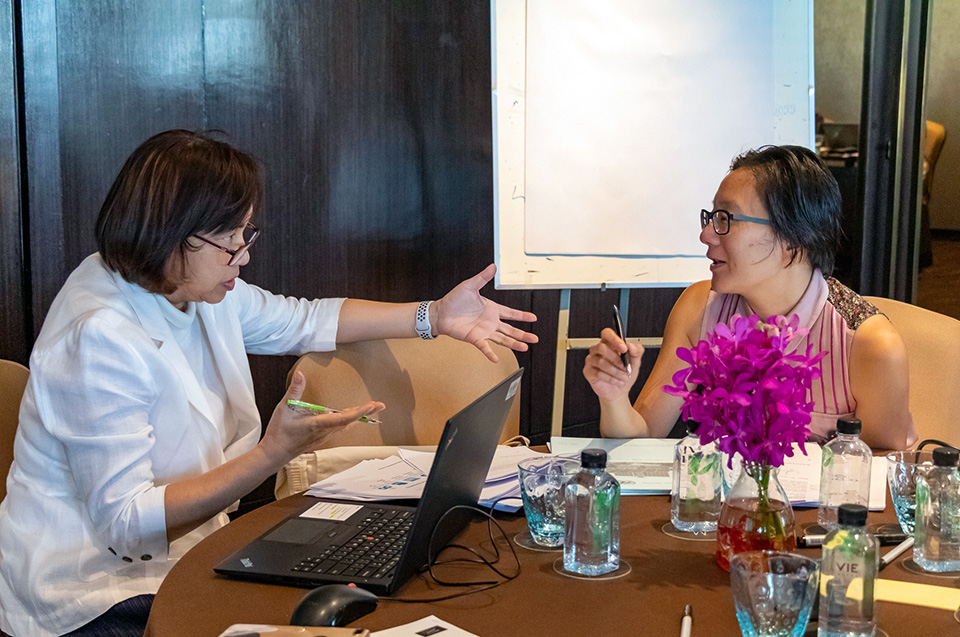 “This workshop was not only about information, but skills,” remarked participant Elita Karim, a Bangladeshi journalist and editor at The Daily Star. “[We] learned how to create the visuals, how to access the gender data, how to communicate it effectively and inclusively.”

Beyond furnishing tools and communication skills, the workshop also provided a space for dialogue. According to Nguyen Thi Viet Nga, a statistician in Viet Nam’s General Statistics Office, this allowed them to “dialogue and learn from other data perspectives in order to cope with challenges from both user and producer sides.” 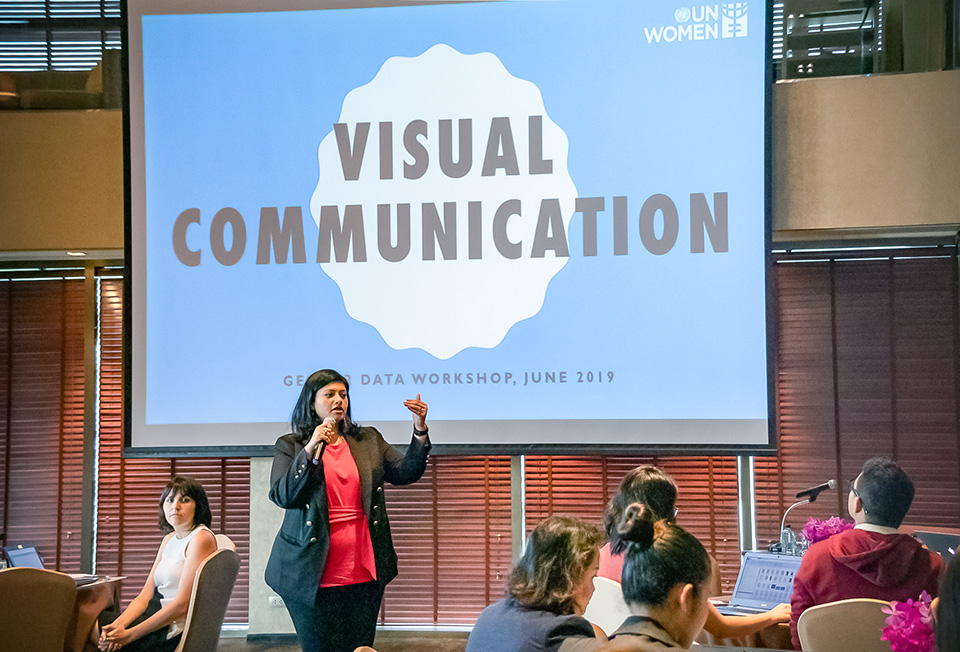 The workshop ultimately challenged participants to think critically about the role data can play in their daily work, whether they produce data or use it to tell a story or communicate an idea.

Doug Gould, a communications specialist who led sessions on communications strategies, was impressed with “the willingness of participants to think about the use of data in a totally different way – as a tool for change”.