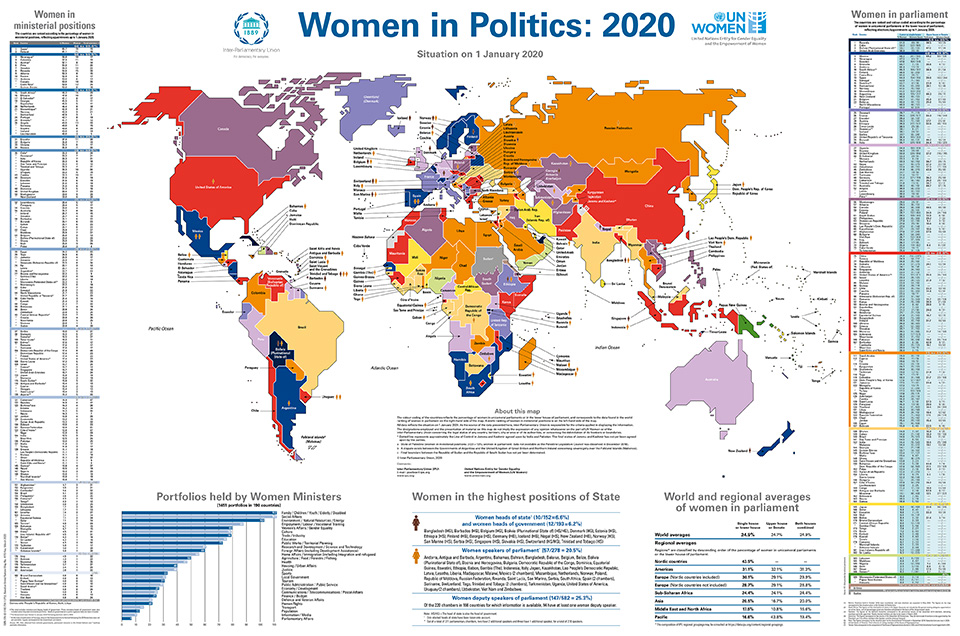 The IPU-UN Women map, which presents global rankings for women in executive and government positions as of 1 January 2020, shows all-time highs for women heads of state and heads of government, women Speakers of parliament and women MPs and ministers. Graphics: IPU

Geneva, Switzerland and New York City, USA — Women’s representation in political decision-making continues to increase but at a dragging pace, with three-quarters of parliamentary seats still held by men, according to new data presented in the 2020 edition of the IPU‑UN Women map of Women in Politics. The data’s publication coincides with the 25-year review of the implementation of the Beijing Platform for Action, which remains the world’s most comprehensive agenda for gender equality.

The IPU-UN Women map presents global rankings for women in executive, government and parliamentary positions as of 1 January 2020. It shows all-time highs for the number of countries with women Heads of State and/or Heads of Government, and for the global share of women ministers, parliamentary speakers and parliamentarians. Still, 25 years after the Beijing Declaration and Platform for Action, which set the international target for reaching gender balance in political decision-making, women are underrepresented across all levels of power.

UN Women Executive Director Phumzile Mlambo-Ngcuka said: “We have created a world where women are squeezed into just 25 per cent of the space—in parliaments and in other critical decision-making spaces. Yet we know that more women in high-level political decision-making positions leads to policies that benefit the whole of society. Women and girls are radically impatient for change and we are calling on leaders and parliamentarians to take the necessary actions to ensure their voices are heard and their priorities reflected.”

“It is impossible to predict when women will have equal opportunities in politics as we cannot see a clear trend,” IPU President Gabriela Cuevas stated. “But what is absolutely clear is that current efforts are not enough, and some countries are actually going backwards. We cannot afford to wait…It is time to translate words into actions and to start demanding commitments and legal changes. We must engage with the 46,000 members of parliament in the world to eradicate all discriminatory legislation to ensure that women can enter politics.”

Women Heads of State and Government

While progress in women’s representation among world leaders continues to lag, by comparison, only eight women leaders were in power when the IPU and UN Women launched one of the first editions of the Map in 2005.

Today, more than half of women Heads of State and Ggovernment are in Europe. Nearly all governments in the Nordic countries (Denmark, Finland, Iceland, Norway) are headed by a woman, with Sweden being the exception.

Three women are serving as Heads of State or Government in Asia (Bangladesh, Nepal, Singapore), one in Africa (Ethiopia) and one in the Pacific (New Zealand).

No countries in the Arab States region have had a woman Head of State or Government.

There has been an encouraging trend of more governments with gender balanced cabinets: women now account for 50 per cent or more ministerial positions in 14 countries, up from nine in 2019. An additional 16 countries have more than 40 per cent women ministers.

The 14 countries with 50 per cent or more women in cabinet:

In the 190 countries for which data is available, men continue to dominate certain ministerial portfolios. For example, there are only 25 finance / budget portfolios and 22 defense portfolios led by women ministers.

Conversely, despite some shifts in recent years, women ministers are still most likely to oversee family and social affairs, followed closely by environment and energy portfolios.

For the first time since 2015, the number of countries without women’s representation in executive cabinets has dropped into single digits, with nine countries remaining without women ministers (Brunei Darussalam, Kiribati, Papua New Guinea, Saint Vincent and the Grenadines, Saudi Arabia, Thailand, Tuvalu, Vanuatu and Viet Nam).

Women now serve as parliamentary speakers in all regions of the world. Only the Pacific does not currently have a woman presiding officer of parliament.

The share of women parliamentary speakers overall is 20.5 per cent in 2020 (57 out of 278 presiding officer posts across 192 countries). This is double the number of women speakers 25 years ago when the United Nations Beijing conference launched its ground-breaking action plan for gender equality.

However, the share of women deputy speakers decreased by 3 percentage points to 25.3 per cent compared to 2019.