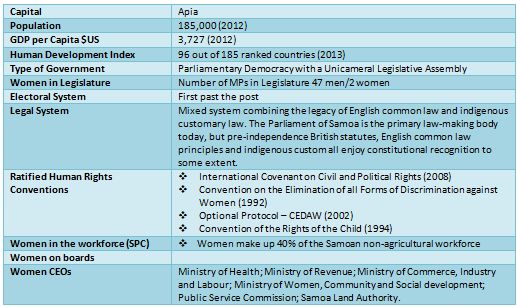 Samoa is a Pacific Island country situated north of the Kingdom of Tonga and west of Cook Islands. Samoa has a total land area of approximately 2,934 sq. km and consists of two main islands – Upolu and Savai’i – and seven small islets. The capital of Apia is located on Upolu, which is also home to nearly three-quarters of Samoa’s population[1]. The Fa’a Samoa, or traditional Samoan way, remains a strong force in Samoan life and politics.

The Samoan constitution makes reference to equality before the law for women but does not prohibit discrimination on the grounds of sexual orientation or HIV and AIDS.  Samoa has limited scope for anti-discrimination coverage beyond public institutions.

Samoa’s Family Safety Act 2013 defines domestic violence broadly to include physical, sexual, emotional, verbal and psychological abuse and enables complainants to seek protection orders against abusive partners. Samoa has no formal family court to deal with domestic violence and family issues.  The definition of rape is limited to sexual intercourse and girls 16 years and older can be held accountable for incestuous relationships.

The common law rule requiring proof of physical resistance in order to establish absence of sexual consent is still applied, as is the defence of reasonable belief that the victim was of a legal age of consent (if the actual age of the victim is between 12 and 16).

Customs and traditional practices are safeguarded by the constitution in a range of contexts in Samoa and the application of customary practices influences formal criminal procedures. The Samoan traditional reconciliation practice of ifoga is sometimes used to justify reduced sentences or to prevent charges from being laid in cases of domestic violence. Historically, many police have viewed domestic violence as a family matter and often try to facilitate reconciliation rather than taking a complaint further.

Abortion is criminalised in Samoa with a penalty of seven years imprisonment.

Fault-based divorce is practised in Samoa, and division of matrimonial property in cases of divorce does not take non-financial contribution into consideration.

Candidates for political leadership must hold a Matai, or chiefly title. In 2011 female Matais accounted for 10.5% of all Matai in Samoa. At the village governance level, women make up close to 36% of total Matai.  Women can also be appointed as Matai Palota (ballot chiefs). Voting rights were only afforded to Matai until 1990 when suffrage was granted to all citizens. Today, women over the age of 20 years are eligible to vote.

Samoa currently has two female members of parliament in the Samoan legislative assembly, accounting for 4.8% of women in parliament, compared with 8.2% in 2006. In March 2012 the government tabled a Constitutional Amendment bill seeking a 10% floating quota of reserved seats for women as a temporary special measure to increase women’s representation. This bill was passed on 24th June 2013 and is colloquially known as the 10% act.

The Samoan economy is dominated by subsistence agricultural farming; at least two thirds of the adult workforce, aged 15 years and over, fall into this section. The government remains the largest employer in the formal sector and women account for close to 53% of the total public service. In the private sector, women dominate the manufacturing sector (although they are mostly employed in the Yazaki automotive wiring plant). Women head more than 40% of small businesses, mostly in the private sector and mostly with the assistance of micro-finance initiatives. The overall gender ratio of government staff is about 50-50[1]. There has been a major increase in the number of women in top management positions (from 18% in 2001 to 53.3% in 2009/10) and the number of female chief executive officers and general managers increased from 17% to 29.4% during the same period[1].

Samoa passed the Labour and Employment Relations Act in April 2013 which has not only provided stricter guidelines for sexual harassment, but also provided clauses for no discrimination against applicants who are pregnant, mandatory maternity leave, paid maternity leave and equal pay without discrimination based on gender.

Under the Labour and Employment Relations Act, harassment is now described as any unwelcome and offensive conduct that induces the fear of harm or serious disturbance to a fellow employee and includes: conduct of a sexual nature; offensive jokes or name calling; physical assault or threat; intimidation; ridicule or mockery; insult; offensive objects or pictures; and interference with work performance. Maternity leave must be granted for a consecutive period of at least four weeks with full pay and two weeks without pay

Violence against women presents major health issues for Samoan women. Overall, 46% of Samoan women who have ever been in a relationship have experienced one or more kinds of partner abuse. The most common form is physical abuse (38%), followed by sexual abuse (20%) and emotional abuse (19%). Approximately 30% of women who had been physically abused reported being injured as a result of this abuse. Of the women who reported physical partner violence, 24% had been punched, kicked or beaten while pregnant. In almost all of these cases, the perpetrator was the child’s father.  Of the women who reported being victims of violence, 78% said they had experienced domestic violence, 11% were victims of sexual violence, and 11% had experienced indecent assault.

Approximately 97% of women who were victims of domestic violence did not report it to the police, and 36% of these women said they failed to report it because they felt it was a private matter between husband and wife, 8% because they felt it was a minor offence and 7% because reporting was incompatible with their love for their husbands. About 96% of the perpetrators were the women’s husbands.

About 70% of women think that men sometimes have a good reason to beat their wives.

Maternal mortality is at 100 deaths per 100,000 live births (adjusted for misclassification and under-reporting) and 81% of births are attended by skilled birth attendants.

The contraceptive prevalence rate is 29%, and 46% of women identify an unmet need for contraception – by far the highest in the region for countries with available data. It should be noted, however, that this data only applies to married women aged 15-49 (i.e. not all sexually active women) as the Demographic and Health Survey 2009 focused specifically on this group. The adolescent birth rate is 44 per 1,000 women aged 15-19.

Annual maximum and minimum temperatures have increased in Samoa since 1950; maximum temperatures in Apia have increased at a rate of 0.22°C per decade. Satellite data indicates that the sea level near Samoa has risen by approximately 4mm a year since 1993. Compared to the global average is 2.8-3.6mm per annum. Over 70% of the Samoan population live in rural communities and rely on the subsistence economy, and therefore climate change and natural disasters pose a direct threat to their security. In 2012, Cyclone Evan had a grave impact on Samoan infrastructure and housing stock, leaving many homeless.

Ending Violence against Women (EVAW) Programme: This programme continues to focus on the prevention of and response to violence, exploitation and abuse of women and girls in Samoa through its Pacific EVAW Facility Fund. The fund provides financial and technical support to organisations addressing EVAW throughout the country, and supports capacity development amongst government and civil society partners in order to provide multi-sectoral and survivor-focused VAW services. The grants facility component enables direct outreach to marginalised groups and VAW survivors with better access and availability of VAW services, information, knowledge on human rights and equality.

UN Women provides stakeholders with access to virtual knowledge platforms, tools and evidence-based resources in order to better equip them with the knowledge and evidence to advocate for strengthened EVAW legislation, improved policies and services for violence against women survivors. The EVAW programme, in collaboration with partner organisations, aims to inform women and girls about the availability of VAW services and to support social transformation through campaigns such as the United Nations Secretary General’s UNiTE to EVAW and Say NO-UNiTE.

Women’s Economic Empowerment (WEE) Programme: UN Women is promoting the use of a gender-responsive policy framework in planning documents at all levels through supporting the production of nationally-generated disaggregated data and statistics on the economic situation of women in Samoa.

Increasing Community Resilience through Empowerment of Women to Address Climate Change and Natural Hazards (IREACH) Programme: UN Women supports the adoption and implementation of gender equality commitments in strategic documents for climate change and disaster risk management through capacity strengthening of stakeholders and the provision of knowledge products and tools on the gendered implications of climate change and disasters.

Up one level
news

The UN joint statement on the delay of the passing of the sexual violence bill (RUU TPKS)
From where I stand: “Do not wait for others to hand you your rights”
“I believe growth in our society can only begin by listening to each other”
“I have the power to do more, to learn more, and I have the ability to affect my community.”
“I think as an individual I want to work towards creating safe spaces for everyone”
END_OF_DOCUMENT_TOKEN_TO_BE_REPLACED