The 2017 Annual Report highlights the life-changing results of our grantees working to prevent and end violence against women and girls around the world. It also aims to show our increased investment and efforts in building capacity and ensuring sustainability of our grantees. The 120 UN Trust Fund-supported projects implemented in 80 countries and territories, contribute to a growing knowledge hub of what works in preventing an ending violence against women and girls.

Last year, the projects supported by the UN Trust Fund reached 6,362,155 people including women and girls, men and boys, government officials and the general public. At least 340,833 women and girls benefited directly from services, empowerment activities and protection from violence during the year.

In 2017, the UN Trust Fund sought in particular to reach women and girls from marginalized and underserved communities and groups, those who face particular challenges because of discrimination, poverty or isolation in rural or remote settings. Among those directly served by UN Trust Fund grantees, for example, were women and girls with disabilities, lesbian, bisexual and transgender women, indigenous women and refugee or internally displaced women and girls. 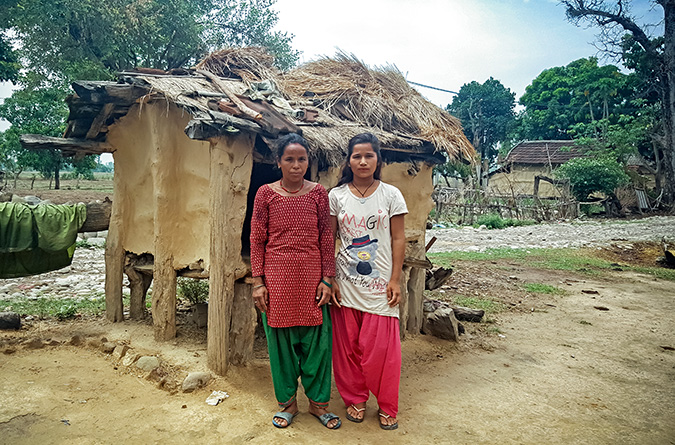 Jayanti, 17 years old and Jamuna, 35 years old outside a chhaupadi hut, a harmful traditional practice, that Jamuna used for 22 years and was used by Jayanti for 5 years. Through advocacy from Restless Development Nepal, the mother and daughter have not slept in the hut for over a year and the shed will soon be demolished. Photo: UN Women/Nuntana Tangwinit

Take Five: "I am also your child, and you should treat me equally."
Take Five: “The contribution of women and girls to sustaining peace and security will be recognized”
Take five with Sultana Kamal: If you believe in Human Dignity, then the Principle of Leaving No One Behind should automatically be in your agenda
Orientation on National Action Plan on Women, Peace and Security for Members of Parliament to Accelerate Localization of Women, Peace and Security Agenda
"Gender responsive policies to safeguard women’s economic empowerment" speech by Gitanjali Singh, Country Representative, UN Women Bangladesh
END_OF_DOCUMENT_TOKEN_TO_BE_REPLACED