Because love, not violence, is the key to solving problems: Viet Nam Youth campaigners

“I did not know that at least one-in-three women will experience physical or sexual violence at some point in their lives. I also was not aware that my best friends experienced violence at home and in public. It is shocking that this problem is actually so close to home,” said Phong, a male student in Thang Long University, Ha Noi.

Phong was one of 17 university students from Ha Noi, in charge of organizing and leading the UN Women-supported “Orange the Journey” campaign to end violence against women and girls. From early November 2013, these students ran numerous activities including singing on the bus and talking to passengers about violence against women, seeding social media messages and organizing a bicycle ride to raise awareness and encourage youth to join hands to end gender-based violence.

The initiative inspired hundreds of their peers to participate and take action. After just two weeks, the Vietnamese Orange the Journey Facebook fan page had more than 300 followers and the bicycle ride on 30 November attracted 200 participants. Last 30 November 2013, in orange T-shirts with banners, stickers, young bike riders were holding orange ribbons, gliding through the capital’s streets, chanting their message in Vietnamese, “End violence. Start love. Eliminate violence against women and girls”. Hundreds of bicycles emblazoned with the campaign orange ribbon. 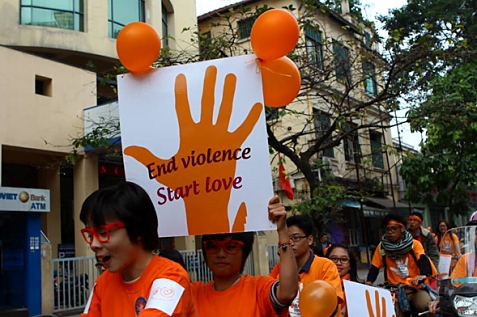 Violence against women and girls is the most pervasive violation of human rights all around the world. In Viet Nam, according to the 2010 National Study on Domestic Violence against Women, 58 per cent of ever-married women had experienced at least one form of violence (physical, mental or sexual) from their intimate partner at some point in their lives. Approximately 50 per cent of victims did not tell anyone about the violence they endured and 87 per cent did not seek help from public services. Despite considerable progress in establishing laws and policies, and building evidence on such violence, implementation of the laws and policies has been slow. This is largely the result of deeply entrenched cultural values, attitudes and practices in Viet Nam that are rooted in gender norms, and which ultimately justify exploitative behavior and continuation of violence against women and girls with impunity.

“I know that our efforts may not immediately change people’s attitudes and behaviors. But, at least we have encouraged women and girls who experience violence, and men and boys who witness violence to speak out, and we have reminded people that love, not violence, is the key to solving our problems,” said Phong. 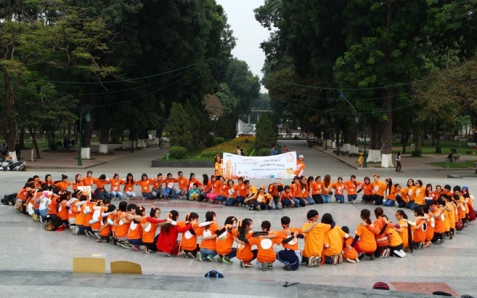 The campaign was also supported by three local NGOs networks including DOVIPNET, GENCOMNET and NEW, working on gender equality and violence issues in Viet Nam. “Orange the Journey” was part of a broader joint campaign “16 Days of Activism against Gender Violence” to raise awareness of the issue, organized by UN agencies in partnership with the Government and NGOs in Viet Nam. It ran from 25 November, which marks the International Day for the Elimination of Violence against Women, to Human Rights Day on 10 December, to acknowledge that violence against women is a significant human rights abuse that needs to be tackled on a global scale.

Related News
12/04/2017
A UN Women toolkit for peer education opens young eyes in China and Viet Nam
11/12/2014
Around the world, women and men of all ages “orange their hoods” to end violence
18/08/2022
Building a campus without violence in Viet Nam
29/07/2022
Community-based networks help Vietnamese women migrant workers better protect their rights
29/03/2022
For a Safe and Equal Cyberspace
END_OF_DOCUMENT_TOKEN_TO_BE_REPLACED