Bangkok, Thailand — When young people talk to other young people about women’s rights, the experience can be eye-opening for both sides.

“I have learned what it means to truly respect each other,” said Zhang Hang, a student at Beijing Royal School who attended a training given by students at Beijing Normal University. 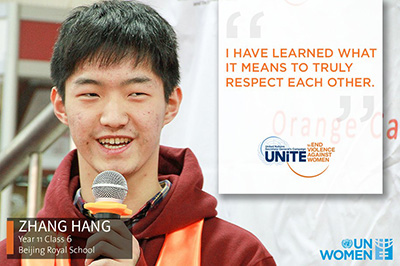 The high school student learns how to be a Change-Maker. Photo: UN Women/Alejandro Hita

“This is the first time I talk openly about gender, sex and life,” said Li Hexin, a student at the university who used UN Women’s Change-Makers toolkit for the training.

If efforts to promote right are to succeed, and succeed for the long term, it’s clear that youths must be involved, both in spreading and getting the message. So in 2014 the UN Women Regional Office for Asia and the Pacific, as part of the Secretary General’s UNiTE to End Violence against Women campaign, launched the Change-Makers: A Young Activist’s Toolkit for Ending Violence against Women and Girls with the UNiTE Youth Network. 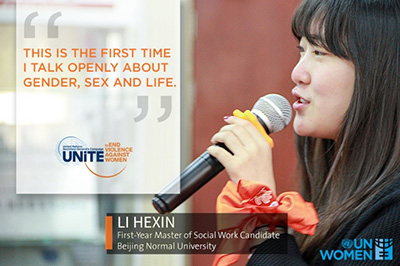 Lin Hexin, a first–year master of social work candidate at Beijing Normal University, talks about what she herself learned while teaching others. Photo: UN Women/Aleijandro Hita

The toolkit features activities, fact sheets and case studies that teach young people how to talk with their peers about women’s rights, violence against women, healthy relationships between the sexes, and how to take action on your beliefs.

In 2015, UN Women rolled out the Change-Makers toolkit in China and Viet Nam, with support from the Government of Denmark.

For the training in China that started in December 2015, UN Women partnered with two of the country’s most prestigious schools. UN Women trained students at Beijing Normal University on how to use the toolkit, and they in turn use it to train 48 students at Beijing Royal School. The training on “healthy relationships” involves students 13-18 years old.

The university students do the training using a social media toolkit that they developed to promote gender equality online, and the Change-Makers toolkit, which they adapted to address sexist traditional Chinese attitudes and behaviors.

“To prevent gender-based violence, each of us has to be a Change-Maker,” said Liu Haodin, a student taking the training. 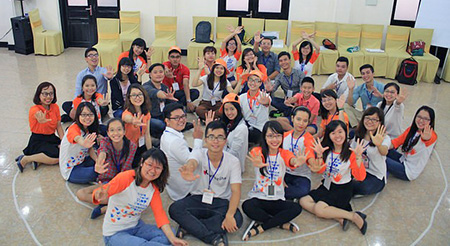 In Viet Nam, UN Women partnered with the Viet Nam Volunteer Center. The center is under the Ho Chi Minh Communist Youth Union, which has a wide network of youth across the country.

From August to December 2015, UN Women Viet Nam integrated the Change-Makers toolkit into a youth-led project to use social media to promote “positive masculinity.” The 35 members of the Viet Nam Volunteer Center who took part in this project divided into six groups and created Facebook pages that targeted different audiences, such as people who witnessed sexual harassment, student couples in Hanoi, and deaf people in Da Nang city in central Viet Nam. 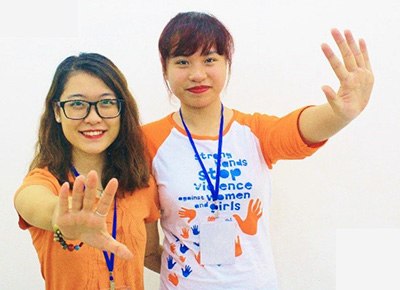 Participants in the social media training in Viet Nam say no to violence against women. Photo: Viet Nam Volunteer Center

“I have gained knowledge and experience about dealing with violence that I did not notice before. In addition, my community fortunately has awareness of gender equality through my personal channels on Facebook or Instagram,” said Tran Nguyen Vu, a women’s rights activist.

UN Women then worked with the United Nations Development Programme to expand the Change-Makers training to 110 students from 20 universities across Viet Nam. These students set up clubs with other students at their universities to spread what they learned.

Trainers, trainees and UN Women staff in the two countries said these were among the keys to the success of the Change-Makers projects:

UN Women will put these lessons into practice as it moves into the next phase of the project and introduces it in other countries in the region.

Related News
11/12/2014
Around the world, women and men of all ages “orange their hoods” to end violence
18/12/2015
UN Trust Fund to End Violence against Women awarded grants worth close to USD 13 million to 33 organizations responded to the 2015 Call for Proposals
06/01/2014
Because love, not violence, is the key to solving problems: Viet Nam Youth campaigners
18/08/2022
Building a campus without violence in Viet Nam
29/07/2022
Community-based networks help Vietnamese women migrant workers better protect their rights
END_OF_DOCUMENT_TOKEN_TO_BE_REPLACED