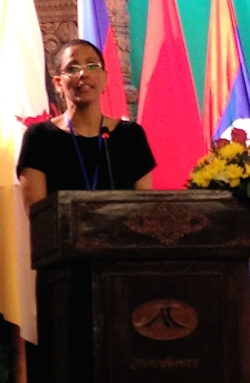 Over the last 30 years, there has been a really slow upward tick in advancing women’s participation and leadership in political processes. The global average for women in parliaments is 22 per cent. Asia is slightly behind this global average at 18 per cent. Across the ASEAN counties as the papers reveal, there has been small progress ranging from a high of 27 per cent in the Philippines to 5.6 per cent in Myanmar

Women’s limited participation in decision-making is also apparent in the other sectors of governance and decision making, as in ministerial portfolios, senior positions in the civil service; administrators of justice and the police.

This is a central and persisting challenge. Women’s equal opportunity and treatment in political life is a representational right. And in addition, women’s perspectives, thoughts and experiences enrich governance and make that more responsive to the needs of the diversity of country’s citizenry. Low participation therefore is a problem. Inequality in the distribution of voice, representation and influence in public sector and political processes is a problem. This reality signifies the power and pervasive nature of conscious and unconscious bias against women.

Because of studies such as what we will hear today, we understand that patriarchy is a strong and enduring force, a system where leadership, where authority and where power are associated with men and with masculinity.  In most every part of the world, gender roles accepted by societies ascribe to men leadership in both the public and private spaces with women being seen as subordinate in this authority structure, supportive and primarily as care takers.

An unhealthy blend of social, political, economic and sometimes even legal barriers hinder women’s participation in formal and informal politics.

Political parties with their informal networks avoid women because they are seen as being able to command or access less resources needed for campaigning, insufficiently linked into influential constituencies

Families and husbands, not to mention voters, deter and discourage women, expressing the strong gender norms that a women’s place is in the home and not in the House of Representatives.

Religion can also be used to justify gender-based restrictions. Indeed it was only in 2008 that Maldives amended its constitutional provision that banned women from serving as President and Vice President.

And women are often disproportionately attacked in misogynistic and sexually abusive ways that can test the resolve of the strongest of people.

The cultural bias and discrimination against women as leaders in the public sphere is intense and it for these reasons that CEDAW called for temporary special measures to accelerate de facto equality between women and men and to ensure equality of opportunity and treatment. An example of such special measures is quotas and now we know that it is in those countries which have adopted quotas that women’s participation in parliament has increased.

So change is possible and is happening even though way too slowly. That change must and will accelerate as more girls and women access education and as the activism of feminists change the landscape with our insistence on women’s fundamental rights to equality of opportunity, to non-discrimination, freedom and autonomy. And where more and more men are embracing their role as partners for advancing gender equality, willing to actively speak out, make space and work alongside women in both the workplace, in politics and in the home.

It is this vision that that triggered this project spearheaded by ACW under the leadership of Minister Phavi. The papers commissioned on women’s political participation are a pioneering initiative within ASEAN and can shape programming and policy making.

Over the next day and a half, we will have the opportunity to listen to each other, to engage in a dialogue and to take away suggestions and inputs to finalise the papers so that they give the best guidance on the kinds of work that would increase women’s power, voice and influence in the different political arrangements represented by the diversity of ASEAN member states.

The work of this ACW project is also happening at precisely the same time as the member states of the UN undertake national, regional and international appraisals of the implementation of the Beijing Platform for Action. That document speaks so eloquently to the absolute imperative of women’s equal participation noting;

“Equality in political decision-making performs a leverage function without which it is highly unlikely that a real integration of the equality dimension in government policy-making is feasible.”

The BPFA makes a number of recommendations for states including doing exactly what this project is attempting to achieve:

“Monitor and evaluate progress in the representation of women through the regular collection, analysis and dissemination of quantitative and qualitative data on women and men.”

Yours is a timely study also as we also come assess the MDGS and as you know one of the targets under Goal 3 was to increase women’s political participation.

And so, this project assumes a certain historical significance as it allows us to look back but perhaps more significantly, it allows us to plan forward through the BPfA (Beijing Platform for Actions) processes as well as the Post 2015 agenda setting.

Globally there is consensus that the Post-2015 development agenda must adopt a transformative stand-alone goal to achieve gender equality, women’s rights and women’s empowerment, structured around several target areas: freedom from violence, gender equality in capabilities and resources, and importantly gender equality in decision-making power, and a voice in public and private institutions.”

Over the next days, as we listen to each other and attempt to move the agenda from paper-based constitutional guarantees of equality to a lived reality of that in culture, we need to ask ourselves some hard questions:

What are the specific possibilities presented by political arrangements in our countries? In this regard, we need to be both visionary and highly practical and context specific in our recommendations.

We also need to understand better what inputs would be needed to break the power of this unconscious and conscious bias against women in politics  and decision-making. And we need to think carefully about how we engage with men and with political parties in ensuring that the normative becomes the norm.

Our partnership with ASEAN is a priority for UN Women. We have and continue to work with ACW, with ACWC and with AICHR. We hope to deepen partnerships with ACW delegates in the countries where we have presence, ensuring that we support your work and your vision of an ASEAN as contained in the 1988 Declaration on the advancement of Women:

“To promote and implement the equitable and effective participation of women whenever possible in all fields and at various levels of the political, economic, social and cultural life of society at the national, regional and international levels.”

In the Cambodia study we read about the old saying that a cake cannot be bigger than the pot” as a way of representing a hierarchy in human relations between adults and children and women and men. But of course, the best made cakes, always rise above the rim of the pot.