Before the cyclone Rakesh Prakash and his family relied on the income they received from the produce they harvested on their 10-acre farm in Toge, near Ba. Twice a week they would harvest 300-400kg of eggplant, chillies, cow peas and spinach and take it to the local market to sell to market vendors, who would then on-sell it to the public. 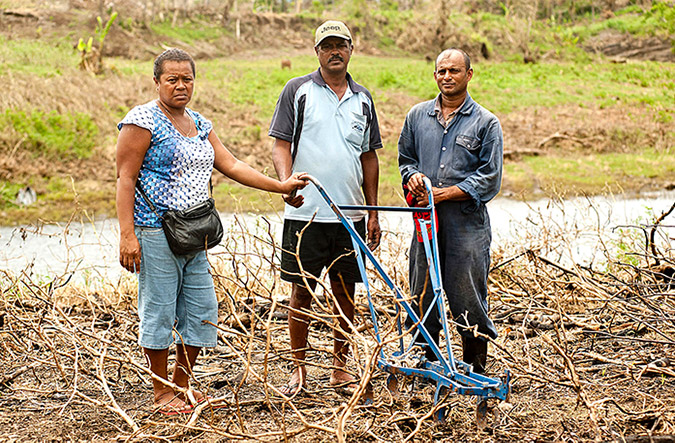 Lusiana Bulu (Secretary of the Ba Market Vendors Association) with Rakesh Prakash and his brother Sanesh Kumar on their farm just outside of Ba. Flooding destroyed much of the crops, leaving them with bare twigs and rotten eggplants. Credit: UN Women/Murray Lloyd

While Mr Prakash, his wife and parents hid under their bed, flooding caused by Tropical Cyclone Winston destroyed the majority of those crops. The loss has undermined not only his own family’s livelihood, but also that of the 15-20 market vendors and countless customers who relied on his produce each day.

Preliminary assessments carried out by the Government indicate show around $120.2 million of damage to the agricultural sector, the majority of which is damage to crops. Up to 100 per cent of crops in the most affected areas have been damaged. The ripple effects are reaching the entire length of the country’s food supply chain, and beyond.

Women play an essential part in every part of Fiji’s food supply chain. They are usually responsible for sourcing the food their families need to survive, they are heavily involved in subsistence farming, and they make up the majority of market vendors around the country.

Tropical Cyclone Winston’s early legacy is a shortage of local fresh produce, especially in the west, which not only pushes up prices but also makes it harder for women to source food –whether it is to eat or to sell.

On a normal Saturday, Dhanbhagium Maraj can make up to $200 a day selling at Rakiraki Market. In the weeks after Tropical Cyclone Winston, she not only faces wholesale prices that have doubled or tripled, but also extra transport costs.

“I went to Nadi to buy vegetables,” Ms Maraj explains. “That means I had to pay $22 for the transport there and then come back by carrier for $65 with produce to sell at the market. Because the prices are so high I can’t sell everything on my table so then I have to pay extra to take what’s left over back to my house.”

Manjula Wati from Vunisamaloa in Ba, tells a similar story. 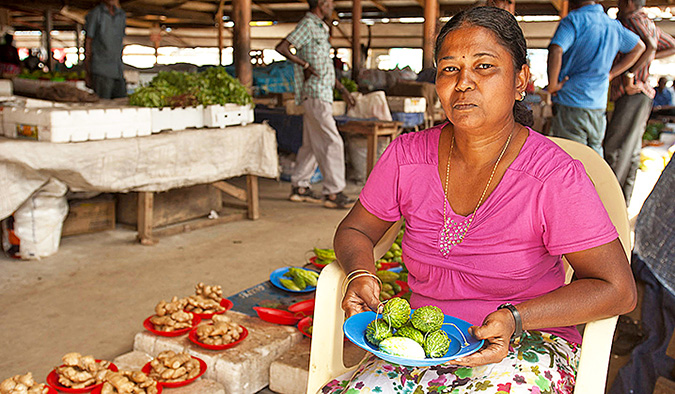 “The main problem is that customers have no money,” she says. “They are relying on rations and they can’t get any money because they can’t go to work because there is no power. I go to the farmers but the price is so high and then we can’t sell it.”

Aleta Miller, Representative for UN Women in Fiji, points out that this has huge implications.

“The money that women earn selling at the markets is often used to pay for their children’s schooling and medical care, as well as for day-to-day expenses and food. Without a regular income these things become unaffordable and families have to make choices between competing priorities.”

Gordon Wong, the Market Master at Lautoka market is already seeing evidence of this, with people having to make a choice between buying greens at the market or buying at the supermarket.

“Tables are empty because there is not enough produce. Those who are well established are the ones getting the supplies because they are better organised and can buy in bulk. Smaller vendors are suffering the most,” he says. 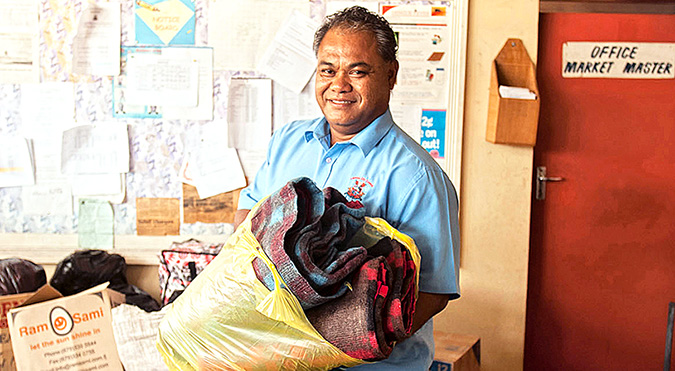 “Women’s roles in agriculture and food supply do make them more vulnerable in times like this, however, it also means they have critical knowledge that can help the sector recover quicker and more effectively. It is essential that we recognise this and ensure that women are fully included in all levels of the response and recovery efforts.”

Through its Markets for Change project, UN Women is providing tents, tables and chairs to the markets most affected by Tropical Cyclone Winston to serve as temporary shelters and market spaces, especially for women who come from rural areas. With funding from the Central Emergency Response Fund, UN Women will also be distributing supplies to market vendors who also grow their own produce, including seeds, tools and fertilisers, reaching 500 market vendors in Rakiraki, Tavua and Ba.

Between 75% and 90% of vendors working at Pacific marketplaces are women and their earnings often make up a significant portion of the incomes of many poor households. Despite this, women are often excluded from market governance and decision-making. M4C works with stakeholders, service providers and the market vendors themselves to: build and support inclusive, effective and representative advocacy groups; deliver appropriate services, training and interventions; ensure women’s voices are heard and taken into account at the decision-making level; and to improve physical infrastructure and operating systems.

Australia’s Department of Foreign Affairs and Trade has provided AU$10 million to support the implementation of the Markets for Change project.