Ha Noi, Viet Nam – Today, at a roundtable at the UN, Mary Robinson, UN Special Envoy on El Niño and Climate, heard strong grassroots voices calling for more women to be engaged in climate change and disaster risk management action.With the theme of ‘Climate Action: Women hold the key”, the roundtable brought together local women, policy makers and development partners to hear the difference that women’s participation can make, particularly in the current emergency response to drought and saltwater intrusion in Viet Nam. 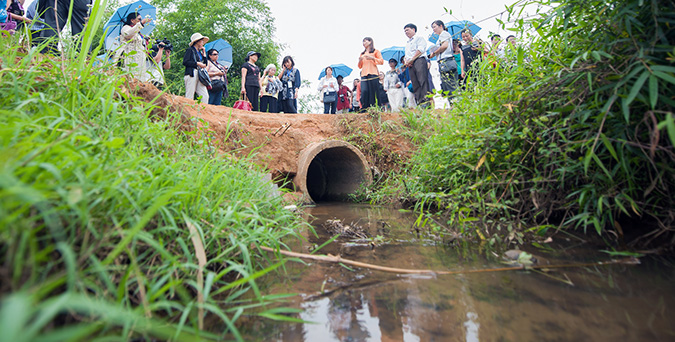 The roundtable showcased presentations from four strong and hard working women who have played an active role in climate change response and disaster management in Ben Tre, Bac Kan, Dong Thap and Hue. These are among the provinces most at risk from climate change and disasters in Vietnam. The women shared their experiences of how climate change has impacted their lives, the challenges they continue to face, and what solutions they have developed to address the situation.

Both men and women must be engaged in disaster preparedness, climate change adaptation and mitigation if they are to succeed. In many places in Vietnam, women are proactive in disaster preparedness and response. They have capacities, talents, skills and knowledge that should be capitalized upon. Yet there has been a lack of recognition of women’s roles and contribution to disaster risk management. Women’s participation in decision-making in local formal political and management structures remains low. This has implications for the ability to respond to disasters in gender sensitive ways.

‘Women are playing an important role in dealing with climate change and disasters. They are the first ones to take care of family members when the disasters strike. Disaster risk reduction planning and adaptation to climate change will not be successful without including the perspectives and women. Community resilience to disasters cannot be achieved without increasing the resilience of women. We need to capitalize on women’s resourcefulness as we tackle the challenges of climate change’, said Ms. Shoko Ishikawa, UN Women Country Representative in Viet Nam.

In the second part of the event, participants proposed solutions to increase women’s participation in design and implementation of gender responsive climate policies. Participants also discussed how to translate grassroots experiences into policy and what to do to support and promote women’s capacity and knowledge. This will enable them to become catalysts of sustainable practices in their community.

Viet Nam is one of the countries most vulnerable to, and most affected by climate change and disasters. The Global Climate Risk Index 2015 for the period 1994-2013 ranked Viet Nam in seventh place. With the majority of the population living in low-lying river basins and coastal areas, it is estimated that more than 70% of the population at risk of multiple hazards. Extreme disasters in the form of flood and storms are more frequent in recent years, causing more damage to people and impacting significantly on the economy.

With the impacts of climate change already being felt, it is now more important than ever to mobilize resources from all stakeholders in order to manage natural disasters more effectively. Women’s capacities, skills and knowledge are valuable resources that are not yet fully being harnessed. Putting women at the heart of climate change action will unlease their collective power, and empower them to play a key role in the national efforts to adress disaster and climate change. 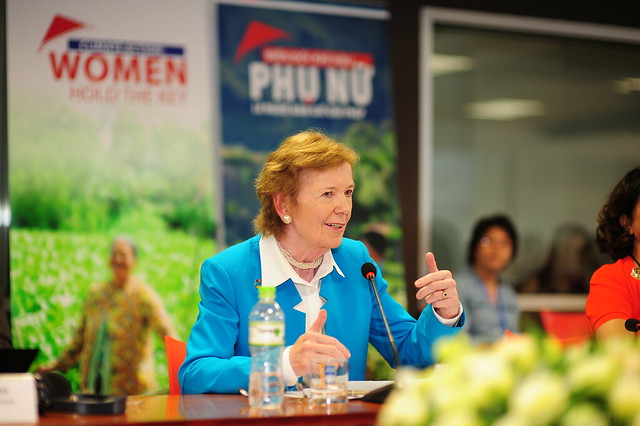 The Mary Robinson Foundation – Climate Justice is a centre for thought leadership, education and advocacy on the struggle to secure global justice for those people vulnerable to the impacts of climate change who are usually forgotten – the poor, the disempowered and the marginalised across the world. The Foundation provides a space for facilitating action on climate justice to empower the poorest people and countries in their efforts to achieve sustainable and people-centred development. The foundation works on highlighting the importance of facilitating meaningful participation of grassroots women in the design, planning and implementation of climate action and disaster risk reduction activities.

UN Women is the UN organization dedicated to gender equality and the empowerment of women. A global champion for women and girls, UN Women was established to accelerate progress on meeting their needs worldwide. UN Women supports Member States in setting global standards for achieving gender equality, and works with governments and civil society to design the laws, policies, programs and services required to implement these standards. UN Women stands behind women‘s equal participation in all aspects of life, focusing on the following five priority areas: increasing women’s leadership and participation; ending violence against women; engaging women in all aspects of peace and security processes; enhancing women’s economic empowerment and making gender equality central to national development planning and budgeting. UN Women also coordinates and promotes the UN systems works in advancing gender equality.