Take five: “Nepal has made great progress on the implementation of the Beijing Platform of Action but much more needs to be done”

Shanta Lakshmi Shrestha chairs the Beyond Beijing Committee (BBC), a coalition of women's rights and gender-justice organizations working to advance the status of women in Nepal. It was created after the Fourth World Conference on Women, held in Beijing in 1995. The Committee advocates and monitors the Beijing Platform for Action (BPFA) from the grassroots to the global level. 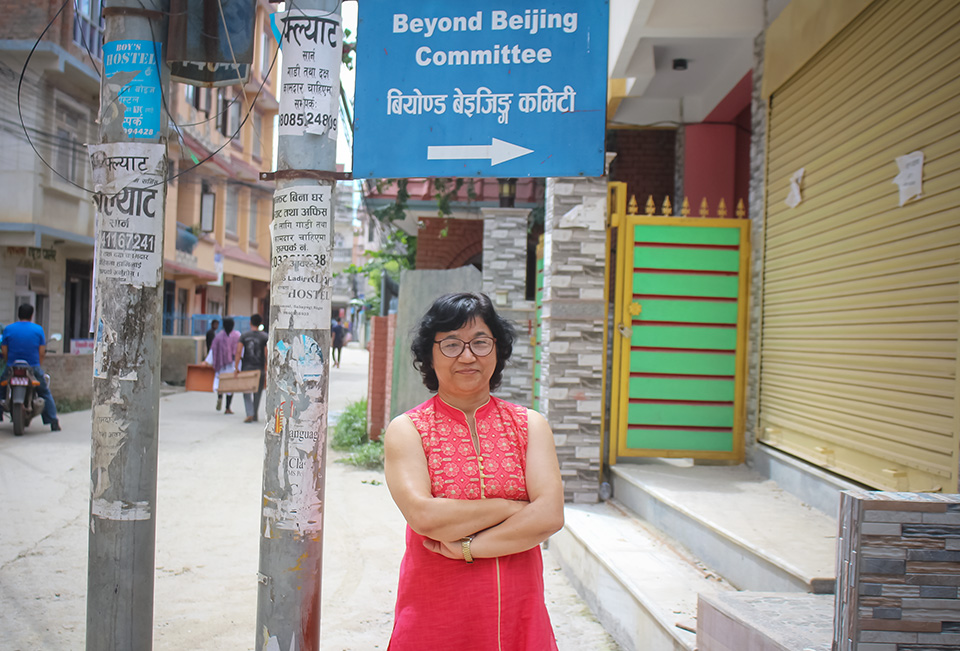 Twenty-five years after Beijing, what are the main achievements in terms of women’s rights for Nepal?

There are achievements in every critical area of the Beijing Platform for Action, but the biggest is that we have a federal ‘women-friendly’ constitution for the first time. After struggling for over 20 years we were able to integrate our concerns and issues into the constitution. Now women’s rights are recognized as fundamental citizens’ rights.

Another related achievement is that we have - for the first time - a female president, speaker of the parliament, and deputy speaker. Across local, provincial and federal levels, women make up 40 per cent of government, due to the minimum participation required in the constitution.

What have been the main challenges in the implementation of the Beijing agenda in your country?

I think the main challenge is the mindsets. The mindset of women, the mindset of men, and other genders, because we are brought up and living in a patriarchal society, nurtured by patriarchal norms and values.No matter how many policies are changed, the problem is to bring those policies into practice, to change those norms and values that hinder the implementation of Beijing agenda. And if people are not socialized in a non-patriarchal way from very early on in life, I think changing these behaviours and mind-set can be very difficult.

I do believe in shaping behaviour at a formative stage of human life, rather than changing it later, which is more costly and difficult. Young people and children learn by imitating, mostly their father and mother. Unless we can form non-patriarchal behaviour now among the young, it will take long time to achieve the gender equality we want.

Moving forward with the Beijing agenda, what do you think are the main priorities for Nepal?

The priority is to enact the acts by developing regulations we already have and by implementing them in a gender-responsive manner. There is also a need to develop a stand -alone "Gender Equality Act" like in Norway. We need to increase the capacity of those in decision-making positions, because they are the ones who have the mandate to implement.

So, transforming their way of working is the priority. I think we have enough legislation. Now we have to stop building policies and implement those policies in a gender-responsive way. This should be a priority for the Nepal government, the NGOs, the public, businesses, and all sectors of the country.

How does gender-based discrimination affect women and girls in Nepal?

This is an intersecting issue, there are multiple discriminations. Nepal is a very diverse country, with a population encompassing many different castes and ethnic groups. So, women and girls who are also members of certain groups are discriminated against in multiple layers. Definitely, ending discrimination against all women in general is essential, in addition to that, the intersecting discriminations need to be ended by addressing them with specific actions.

In spite of the principle of “leaving no one behind”, many women and girls are still lagging. For example, a woman member of the low-ranking Dalit caste is oppressed and disadvantaged not only as a woman but also because of her caste, and also her geographical location, disability, economic situation, etc.

What advice would you give to the new generation of activists in Nepal?

The role of young people is very important. Reaching the most disadvantaged women and girls requires passion, conviction and stamina. These needs to be developed and nurtured among the new generation if we are to stand up for equality in the long term.

Related News
01/10/2020
Statement by the President of Nepal, Right Honourable Mrs. Bidya Devi Bhandari, at the High-level Meeting on the Twenty-Fifth Anniversary of the Fourth World Conference on Women (Beijing+25)
30/09/2020
COVID-19 response and recovery efforts need to address systemic gender inequality issues, experts say
13/11/2019
Beijing +25 CSO National Reviews to commemorate the 25th anniversary of the Beijing Declaration and Platform for Action
18/10/2019
25 years after the Beijing Platform for Action in Nepal: A time for celebrations and reflections for women’s progress
30/05/2019
Take Five: “Government alone cannot ensure effective implementation of laws and policies”
END_OF_DOCUMENT_TOKEN_TO_BE_REPLACED