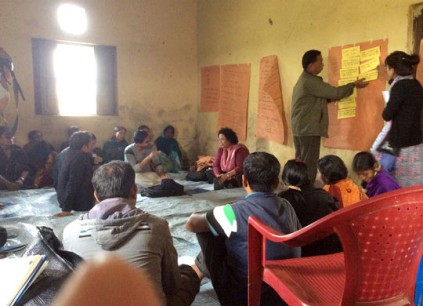 Community members working with women safety audit facilitators to identify physical spaces that are safe and unsafe for women and girls.

At the Citizen Awareness Center hall in Prastoka VDC, Bara district, a group of people are gathered to discuss women’s safety and security issues in the village. A facilitator asks some basic questions, "Where do you feel unsafe in your VDC?" and "What changes would help you feel safer?"

One participant (call her Sita) responded, "As a young girl, it is extremely difficult to travel alone from home to college. To avoid harassment, women from my age group have had to rethink our way of life, including changing the way we dress, in order to avoid 'provoking' men".

In response to a wave of crimes against women in the Tarai region, participatory Women's Safety Audits were conducted to identify spaces unsafe for women and girls, and help secure such spaces.

This discussion was a part of the Women’s Safety Audit, conducted by the Ensuring a Participatory and Secure Transition (EPST) project, jointly implemented by UNDP and UN Women, as part of its larger efforts towards preventing violence, reducing crime, and enhancing community safety and security.

Violence against women in public places is a major concern, especially in villages of the Tarai region, though it is still largely unrecognized, compared to domestic violence. In response to a wave of crimes against women in the Tarai region, participatory Women’s Safety Audits were conducted to identify spaces that are unsafe for women and girls, and produce recommendations to help make such spaces more secure.

The Audit was conducted over the course of a month, where community members critically examined their environments from the perspectives of women and identified characteristics that make certain public spaces hostile and dangerous for women. Safety walks around the village during daylight and evening were conducted to confirm safe and unsafe locations. After the audit, recommendations were developed to improve overall safety and reduce opportunities for crimes against women.

The findings of the Audit were astoundingly clear; inadequate infrastructure -- such as poorly lit roads, lack of public toilets, and toilets with doors or latches missing -- threaten women’s safety. The Audit also revealed that an absence of regular police patrols and isolated spaces where alcoholics and drug addicts congregate place women and girls at risk of violence and sexual harassment. Furthermore, societal attitudes that blame women for ‘inviting’ sexual harassment because of their clothing and/or behavior have only made women more vulnerable.

Some recommendations offered in the Audit to increase women’s safety were functional streetlights, a visible police presence, clean and safe public toilets, separate toilets for women in government offices, including VDC offices and Health Posts, gender sensitization of the police force, and control of alcohol abuse and gambling.

The outcome of the Audit has been that communities have collaborated with village authorities to take remedial measures to ensure women’s security in unsafe areas throughout the village. In Daiji VDC of Kanchanpur, where inadequate policing was identified as a major threat, a temporary police station was established with the support of community members. Kailash Bajimai, CDO of Parsa, said, "The Women’s Safety Audit is an important tool to identify different factors related to women’s safety and combat violence against women."

Related News
11/08/2014
A catalyst for peace
19/11/2013
Charting a course for Timor-Leste’s National Action Plan on Women, Peace and Security
27/04/2022
In the words of Sittie Janine M. Gamao: “To overcome my own fears, I think of myself not as babae lang (just a woman) or bata pa (too young) but as a peace officer doing her work.”
23/03/2022
UN Women supporting female former combatants in the Philippines as agents of peace
22/12/2021
In the words of Police Lieutenant Colonel Melbeth Mondaya: “Protection and education for girls is especially important because they are the key to women’s empowerment.”
END_OF_DOCUMENT_TOKEN_TO_BE_REPLACED