A catalyst for peace

Equipped with leadership skills and an understanding of their roles and responsibilities, more Nepali women are supporting their communities in peacebuilding and conflict resolution. 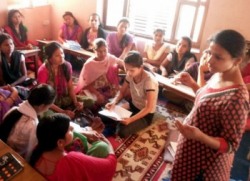 Conflict affected women and girls in discussion with facilitator.

Over the past few decades, there has been a growing recognition of the importance of women’s leadership and the need for their participation in conflict prevention and peacebuilding. The adoption of UN Security Council Resolution (UNSCR) 1325 and subsequent resolutions paved the way for women’s meaningful participation in peacebuilding processes. Nepal developed a National Action Plan (NAP), based on resolutions 1325 and 1820, to enhance augment the participation and leadership of women at all levels of decision-making, conflict transformation and peace processes, including taking measures to address specific needs of women and girls in the design and implementation of all relief and recovery programs, thereby leading to sustainable peace and a just society.

However, centralized policymaking often does not reflect the needs and realities of different districts. There seems to be a gap between policy and implementation, especially in the Tarai region. In districts like Parsa, ambiguity still surrounds the role of women members in Local Peace Committees (LPCs). Though, the Government mandated 33 percent women’s representation in LPCs, limitations still exist concerning the extent to which their opinions and priorities are factored into the decision-making process.

A survey on Peace and Security, commissioned by UNDP and UN Women in late 2013, across seven districts of the Tarai, further supports this assertion, revealing that a majority of respondents (62 percent) perceive that women have a role to play in conflict prevention and peacebuilding but that they are ineffective. Also two-thirds of respondents (78 percent) revealed they have not seen women involved in dialogue, conflict-prevention or significant decision making.

Responding to these challenges, Ensuring a Participatory and Secure Transition, a joint UNDP and UN Women project, equips women leaders with the practical skills and tools required to implement the NAP agenda, assume positions of leadership, and influence peacebuilding processes. Under the project, women leaders and women LPC members are imparted leadership and communication skills. They are also educated about the LPC’s mandate, their powers and responsibilities, and about government programs and how NAP action points can be integrated into broader development planning processes.

“I didn’t know what it meant to be a LPC member,” said Harimaya, an LPC member from Parsa. “One of the leaders asked me to be a member saying that I had been involved in women’s rights. I joined but I hardly attended any meetings nor was I involved in LPC activities. I only realized the roles and responsibilities of LPC members after the training.”

Women are now putting their leadership skills into practice to support other women in their communities and are well positioned as role models for other women. Armed with knowledge and skills, they are now proactively participating in LPC meetings, and also playing roles as facilitators and mediators in conflict or violence-related issues concerning women. Moreover, they are assisting other conflict-affected women in accessing government services, particularly in victim’s status determination processes.

As Nepal is in the process of drafting a new constitution and transitioning into a new system of governance, the hope is that, through initiatives like this, women with enhanced skills and capabilities will creatively use the space available and establish themselves as full and equal partners in the promotion of a stable, secure and peaceful society.