The HeForShe IMPACT 10X10X10 is an initiative that aims to engage an initial 10 governments, corporations and universities around the world in activities to achieve gender equality. The initiative prioritizes legislative bodies and corporations in view of the gender inequality that exists in these areas, confirmed by findings from the World Economic Forum's Global Gender Gap Report 2014. The report highlights a large current gap between men and women in terms of political engagement and opportunity and little improvement in equality for women in the workplace since 2006. Universities join the impact trio because youth engagement represents one of the greatest opportunities for accelerating progress toward the achievement of gender equality, and for ending violence against women.

“If we are to achieve gender equality in our lifetime, we need creative approaches that target the biggest barriers. IMPACT 10x10x10 brings together the strength of partners across sectors to crack some of those barriers from within,” stated Phumzile Mlambo-Ngcuka, UN Women Executive Director and United Nations Under-Secretary-General. “Our pilot IMPACT Champions have taken ownership of these issues. Their leadership and ideas will pave the way for others to join in.”

Since January, leaders from around the world have made personal and institutional commitments to the advancement and achievement of gender equality.

The CEOs and Chairs announcing their commitments today represent five industries and almost 800,000 employees in over 190 countries around the world. They include: Sébastien Bazin, Chair & CEO, Accor; Rick Goings, Chair & CEO, Tupperware Brands; Mustafa Koç, Chair, Koç Holding; Dennis Nally, Chair, PricewaterhouseCoopers International Ltd; Paul Polman, CEO, Unilever. This group provides the foundation for further expansion of the initiative to a broader range of companies, which can draw on the initial ideas to shape their own activities.

As part of the effort, each company has signed the Women’s Empowerment Principles, committing to implement Principle #7—Measure and publicly report on progress to achieve gender equality. In addition, each company has outlined commitments to address the core challenges and barriers in their industry, so as to accelerate progress towards equality. Corporate champions have also made commitments within their companies to boost efforts towards closing the pay gap, reaching parity in management, and mandating gender sensitivity training. Some commitments even go beyond direct staff, including: expanding opportunities for women across the extended supply chain, reaching parity in factory operations, and empowering men as change agents in local communities.

The Champion universities have made concrete commitments including: advancing women in academia, addressing campus violence, building gender-sensitive campuses, and tackling pervasive biases towards women and men. Their specific commitments can be found at https://www.heforshe.org/impact

The companies and universities engaged in 10x10x10 were selected based on their reputation for strong ethical practices, their demonstrated excellence in public service, their global reach and relevance, and their willingness to use their influence to drive and inspire change.

Since the September 2015 launch of HeForShe by actor Emma Watson in her capacity as UN Women Global Goodwill Ambassador, men and boys around the world have committed to take action for gender equality. Nearly 300,000 men and boys have made their commitment to gender equality through the "HeForShe Commitments API" (a geo-located website app allowing men to register and visualize the real-time number of men activated on the map globally). In addition, HeForShe has reached over 2 billion people on social media.

Quotes from Champions of the IMPACT 10X10X10 initiative: 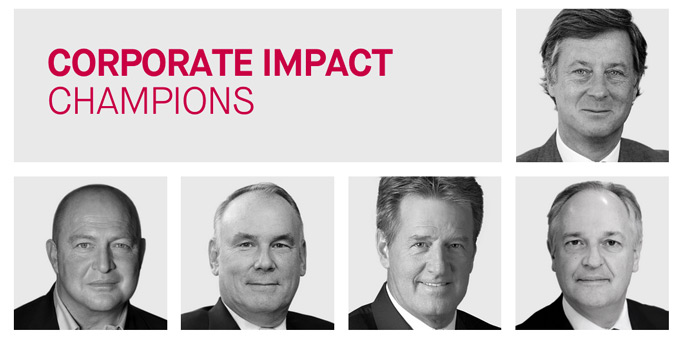 Corporate Champions:(Alphabetized according to company name)

Sébastien Bazin, Chair and CEO, Accor:
“As a father of two brilliant daughters, I am strongly convinced that women should be free to realize their career prospects and given the same opportunities as their male peers. I believe our society will immensely benefit from diversity in the workplace. It is up to all of us, men and women, to stand for gender equality. As the CEO of Accor, I have the capacity and the duty to push further for real change.”

Mustafa Koç, Chair, Koç Holding:
“We are, at Koç Holding, proud to announce our commitment as an IMPACT 10x10x10 champion. We are launching programmes within and beyond Koç Holding, and are committed to using our influence beyond Koç as well. We invite our employees and men across Turkey to join us, taking action for gender equality.”

Dennis Nally, Chair, PricewaterhouseCoopers International Ltd:
“Part of my personal leadership vision is to move the needle on gender equality. HeForShe at PwC will empower men to get involved in gender equality issues through education and practical action. By engaging our people, clients and communities in HeForShe, and collaborating with the 10x10x10 Heads of State, universities, and leading corporations, PwC will harness the immense power of our network to promote inclusion and foster greater equality.”

Rick Goings, Chair and CEO, Tupperware Brands:
“Some things just cannot wait. Men must stand up now for women's equality and make the necessary changes to ensure that all women experience growth and prosperity. Why am I a HeForShe Champion? Not just because I can't wait ... But because I will not wait! We are implementing an engagement strategy to instigate support from our nearly 3 million strong global salesforce and the men in the extended Tupperware Brands family including our board of directors to sign on to the HeForShe movement. We are also scaling our women’s social entrepreneurship programme, Global Links, and partnering with Georgetown University on cutting-edge research on women’s economic empowerment and have committed 500K to UN Women’s gender fund.”

Paul Polman, CEO, Unilever:
“I am delighted to be a HeForShe IMPACT Champion. I am personally passionate about this campaign, which is in line with Unilever's ambition to empower 5 million women by 2020. As part of our commitment to HeForShe IMPACT, we are promoting women's rights, embedding the Women's Empowerment Principles and creating concrete initiatives with UN Women on gender equality, skills-building and job opportunities. I will continue to use my voice across the business to encourage our male employees, as well as sons, husbands, brothers and fathers to pledge their support and take action. Together we can accelerate progress towards achieving gender equality.” 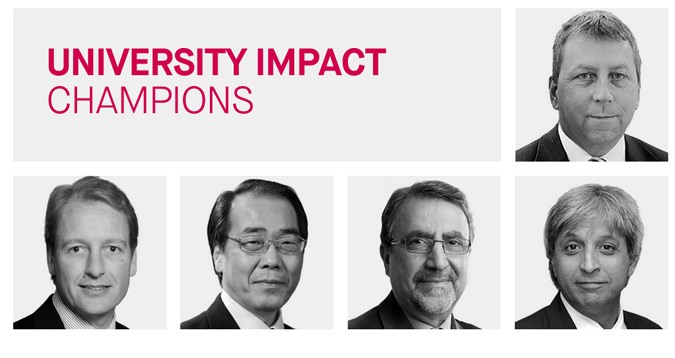 University Champions:(Alphabetized according to university name)

Peter Mathieson, President and Vice-Chancellor, the University of Hong Kong (Hong Kong):
“I have been shocked by the male predominance in higher education, and even more concerned by the passive acceptance by many parties. I welcome the challenge of addressing this issue during my Presidency. I see participation in the 10x10x10 Campaign as an integral element of my efforts to promote equal opportunities in Hong Kong’s university sector, and hopefully in wider society.”

Paul Boyle, President and Vice-Chancellor, Leicester University (UK):
“Men and women have a joint responsibility to achieve gender equality for societies around the world. We should aim to deliver fundamental change within a generation, so that [campaigns] such as HeForShe become redundant and my two daughters and two sons take it for granted that they will be judged on their merits, not their gender.”

Seiichi Matsuo, President, Nagoya University (Japan):
“Gender equality is an absolute necessity for a free and vibrant academic culture. Nagoya University is committed to breaking gender barriers not only on campus but across academia. I am proud of what we have accomplished to date, and am personally committed to going further. I will provide unstinting support to women in our community, creating opportunities at Nagoya and inspiring broader change so that we can drive towards a gender-equal world.”

Feridun Hamdullahpur, President and Vice-Chancellor, the University of Waterloo (Canada):
“University is about potential: unearthing it, enabling it and unleashing it. It’s about the potential of every human being to realize their talents and abilities and the potential for society to reimagine itself anew. Enabling all students, faculty and staff members to achieve their highest potential – and for historically under-represented members of our sector, especially women, to be fairly and justly represented across our entire sector, including in STEM fields – is critical to the fundamental idea of a university. It is also fundamental to universities’ long-term success, and to the quality and betterment of society.”

Adam Habib, Principal and Vice-Chancellor, University of the Witwatersrand (South Africa):
“South Africa’s legacy of gender discrimination and violence is a reality that we fight daily. It is a fight for every person who abhors the abuse of power and the trauma of violence. It is a fight to ensure that the role of men in ending gender-based harm is as active participants and not passive observers; it is to ensure that patriarchy and inequality are uprooted; and to ensure that those who benefit from inequitable hierarchies are an equal part of their deconstruction. It is a fight that universities generally, and Wits University specifically, must be part of.”

HeForShe is a solidarity movement that calls upon men and boys to stand up against the persisting inequalities faced by women and girls globally. The campaign strengthens the support for women's rights as human rights by enlisting the support of men and exhorting them to put themselves forward as advocates for gender equality. For more information, visit https://www.heforshe.org/. For more information about the specific commitments made, visit https://www.heforshe.org/impact

The Women’s Empowerment Principles are a set of Principles for business offering guidance on how to empower women in the workplace, marketplace and community. They are the result of a collaboration between the United Nations Entity for Gender Equality and the Empowerment of Women (UN Women) and the United Nations Global Compact and are adapted from the Calvert Women's Principles®. For more information visit http://weprinciples.org/