Regional Consultation on Promoting and Protecting the Rights of Lesbian, Bisexual Women, Transgender and Intersex Persons in Southeast Asia

For Regional Consultation on Promoting and Protecting the Rights of Lesbians, Bisexual Women, Transgender and Intersex Persons 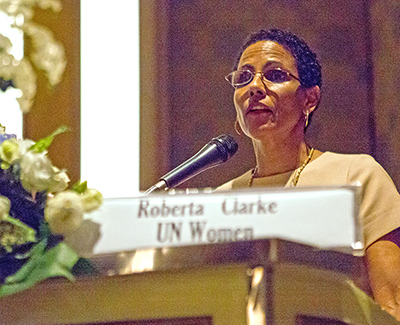 I welcome you to this consultation on promoting and protecting the rights of LBTI persons in South East Asia. It is a component of the Canada-funded project on implementing CEDAW obligations in the ASEAN region and a continuation of a collaboration with OUTRIGHT which produced an important piece of research on violence against LBT in Asia in 2015.

It is also timely as tomorrow is the UNAIDS Zero Discrimination Day. Stigma and discrimination, the Head of UNAIDS reminds us, damage people and fragment societies.

It would be true to say that globally, we have a growing consensus of the moral imperative to ensure equality of treatment and non-discrimination for all, regardless of gender identity and sexual orientation.

This normative progress is fully attributable to human rights advocates and defenders, many of whom are in the room today. Back in 2006, a group of human rights experts, co-chaired by Professor Vitit Muntarbhorn, met in Yogyakarta and reflected a well-known, but little acknowledged truth that women, men and persons whose sexuality does not conform to dominant norms face rape, torture, murder, violence, and abuse. That group of people adopted the Yogyakarta Principles which called for action from the UN human rights system, national human rights institutions, non-governmental organizations, and others.

In 2015, in the context of the SDGs, and the aspiration of leaving no one behind, 12 UN agencies issued a joint statement on ending violence against LGBTI reminding member states of their obligation to ensure that all people are free from violence, persecution, discrimination and stigma. Member state must:

Still it is true that in many countries around the world as well as in South East Asia do not provide adequate protection and redress for abuses and discrimination. At least 18 countries out of 38 in Asia Pacific region criminalize same sex relationships. Some of these countries also have rigorously enforced religious laws that criminalize same sex relationships and gender non-conformity (e.g., cross dressing).

These laws, which are often viewed as morality laws have overlapping harmful impact on women in general in these countries as they severely penalize all consensual relationships outside marriage (i.e., pre-marital, extra marital, and same sex). We too are concerned that the rising forms of extremisms in several countries in Asia can further exacerbate the discrimination and violence experienced by lesbian, gay, bisexual, transgender, intersex persons.

In this regard, currently in Indonesia, in actions led by organizations such as the Islamic Defenders Front, there are calls for gay sex to be criminalised. The authorities have shut down the world's only transgender Islamic boarding school in Yogyakarta, and those working with the LGBT community say there has been a corresponding spike in harassment, stalking and online abuse.

But there are also very encouraging examples of states providing leadership such as Thailand which in 2011 voted for the UN Resolution on combating all forms of discrimination and violence against individuals because of their sexual orientation and gender identity.  And recent policy developments, such as the Gender Equality Act and the 2012 Social Welfare Act, have also given broader attention in Thailand to equality and sexual diversity, particularly for transgender people.

And so we must all double of our efforts to work in solidarity with LGBTI communities. The Joint Statement pledges UN support to constitutional, legislative and policy changes, strengthening of national institutions, and education, training and other initiatives to respect, protect, promote and fulfil the human rights of all LGBTI people.

This is a pledge that is long overdue. The Outright study, which I urge you to read documents a range of violations experienced b Lesbians, bisexual women and transgender (LBT) people in Asia:

And the report laments that many humanitarian organizations and women’s rights NGOs fail to understand the severity of violence and discrimination based on sexual orientation and gender identity.

Back in 2014, I had the opportunity to attend a consultation of organizations working on SOGI issues in ASEAN. Theirs was an expectation, indeed a demand, that the UN system and UN Women in particular should strengthen its engagement, its advocacy and its programming in the ASEAN region on sexual orientation and gender identities.

We have much more to do but through the CEDAW SEAP programme, UN Women has been supporting LBTI groups in preparing shadow reports to the CEDAW Committee in several countries of SEA. In Indonesia, UN Women has developed CEDAW training modules for LBTI groups to be able to use CEDAW in their advocacy. UN Women's work in Cambodia has brought young women together with WLHIV on issues of sexual identities and violence against women, in a process where introspection and challenges to attitudes resulted in a position paper by Cambodian women on the need for social and policy change.

At the regional level, UN Women supports a regional campaign called Unzip the Lips, a campaign for and by key HIV affected women and girls (female sex workers, women living with HIV, female drug users, migrant women and transgender persons) to foster a common platform for galvanizing advocacy efforts and facilitate their participation in important regional and international human rights processes and events.

Other UN agencies are leasing aspects of advocacy, evidence and programming in the Asia pacific region. UNDP with its work on Being LGBT in Asia, ILO on Gender Identity and Sexual Orientation in Thailand looking at rights and diversity in world of work for example. UNESCO has been working on LGBTI Exclusion in Education.”

While UN Agencies have done some work on LBTI rights, much of the movement in the LGBTI movement is due to the hard work, lobbying, strategizing and persistence of the LGBTI community themselves. This is also true for the UN system which has an active staff association (UN Globe) supporting lesbian, gay, bisexual, transgender and intersex (LGBTI) staff members which advocates for the equality and non-discrimination of LGBTI staff so that they can fulfil their duties to the fullest extent possible.

This is hard and often dangerous work because it is profoundly political, in the sense of challenging the status quo and power relations between majorities and minorities. And we take to heart the words of UN Women’ Executive Director when she says:

“We must confront discriminatory social norms in the domestic and community spheres as well as transform the structures that constrain sexual minorities’ voice and agency at the political and structural levels.”

We expect that this two day consultation more consistently and smarter in the collective fight for substantive equality, to end discrimination. It is as Secretary-General Ban Ki-moon. “When the most marginalized and vulnerable face discrimination and abuse, all of us are diminished”