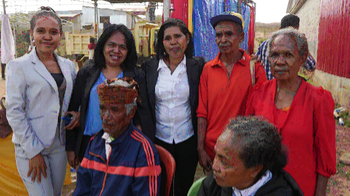 In the past, women in Timor–Leste have had limited opportunities to be involved in conflict resolution due to customary practices that limited women’s roles in leading such processes. In advancing the Women, Peace and Security Agenda in Timor- Leste, the Ministry of Interior (responsible for internal security) is supporting women to lead as professional conflict mediators in their communities.

Since 2016, the Ministry’s National Directorate for Community Conflict Prevention (DNPCC) has been working to strengthen its gender responsive mediation practices, as part of the National Action Plan 1325 on Women, Peace and Security. This programme has focused on recruiting and encouraging more women to train in conflict mediation.

Since July 2019, DNPCC deployed 18 female mediators (out of a total of 39) over Timor-Leste’s 13 municipalities, importantly reaching parity between female and male mediators. Joaquina Soares, 47, and Evelina da Costa Guterres, 45, were some of the first women to work in the DNPCC as mediators.

Over the course of the past 3 years, they have managed to resolve 25 civil disputes which could otherwise have led to violence and crime. Recently, they played a key role in calming an incendiary situation in the village of Leorema, as a group of young men visited an opposing group in a neighboring village and killed 2 men, burnt down 13 houses and destroyed 7 motorbikes.

In Timor-Leste, these incidents are associated with martial-arts group conflicts and contribute to tension and cycles of inter-community violence. While the police continued its investigation of the crime and as perpetrators were awaiting formal prosecution in prison, tension remained between the community members of the two villages. 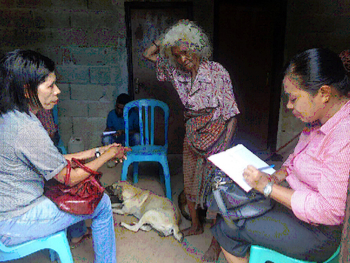 When internal conflict divides communities and risks sparking new violence, DNPCC works in collaboration with the police to support community-based approaches to peacebuilding, which involves encouraging community leaders to sit together, find solutions and de-escalate the conflict.

In September 2019, DNPCC mediators Joaquina Soares and Evelina da Costa Guterres helped to organize a gathering with over 1,000 participants as one of the final steps to months of mediation work with community members to find a peaceful agreement between the two communities in Leorema. The community dialogue, which went over 5 hours, was aimed at allowing people to express their feelings openly.  This dialogue resulted in a community decision to sign an agreement in the future to maintain peace.

In 2020, Soares and da Costa Guterres reflected on the dialogue in Leorema. “It usually takes 1 or 2 visits from the mediators to get people to agree on a solution in this format” says Soares. “But for this case, it took 5 visits to the villages, and many follow-up phone calls - because the issue was extremely serious. People died and many houses were burnt to the ground.”

Soares then spoke about how female mediators differ from male mediators. “We approach with tenderness. We encourage dialogue at meetings and speak calmly. We continue analyzing the conflict with the community until we know the root cause of the problem and follow up with many phone calls – to make sure tensions still don’t exist. In this case there are no continuing issues thanks to the dialogues last year.” Soares noticed that many women in the crowd were not speaking up. This behavior is not surprising or uncommon given that women are not often supported to take leading roles in conflict resolution.

When asked how they address this, Da Costa Guterres raised an important point: “We approach women in the village experiencing conflict, and it is easier for them to be open with us [because we are women]. Some women just don’t have the courage yet to speak up and we can act on their behalf until they do come forward. When women are in the field, we make wide connections within the community and they are proud of us when we help solve the conflict.