The theme for this year’s event was Empowering Women - Empowering Humanity: Picture It!

“Bhutan has made impressive progress in gender equality over the past several decades. On this year when Bhutan celebrates the 60th birth anniversary of His Majesty the Fourth Druk Gyalpo, I would like to acknowledge His Majesty’s strong support to women’s reproductive rights and political participation” said the United Nations Resident Coordinator, Christina Carlson in her address.

Stepping it up for Gender Equality – Reproductive Health 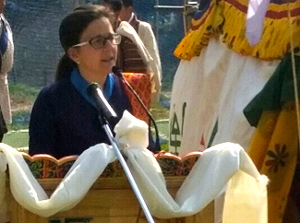 However, one of the biggest challenges facing Bhutan today is the high rate of teenage pregnancy. The trend over the last 25 years has been that over 15% of women (20-24 years of age) continue to give birth before their 18th birthday. The UN RC stated “becoming a teenage mother is rarely a deliberate choice. Pregnant girls are often forced to drop out of school, making it even more difficult for them to earn a livelihood in the future. The high number of teenage pregnancies shows that more needs to be done: we need to support those girls who have become mothers too early, but also to change the trend.”

Since 2012, the UN has supported the expansion of life skills education programme in all the schools in Bhutan.

Globally, women earn less than men, and also carry a disproportionate burden of unpaid care work, which deprives them from other pursuits like earning money, gaining new skills, and participating in public life. Even in Bhutan, women and girls still lag behind in these areas of political participation, economic empowerment and income equality.

The Health Minister, Lyonpo Tandin Wangchuk said “while liberal legislation fosters greater participation in politics, Bhutanese women largely take up subsidiary functions at work places. For instance, the Bhutanese general election in 2013 saw only 6.9% women representation in politics, which is down by 7% from the first elections in 2008. For the local government elections in 2011, only 7% of women participated in the election process.”

UN Resident Coordinator, Christina Carlson added “recent studies conducted with UN support on women’s political participation in Bhutan have shown that prejudices against selecting female leaders are high. Most Bhutanese – men and women – see women as less capable and inferior to men in public decision-making and leadership. These studies send us a clear message: it is not enough for only women to be active and stand as candidates in elections, but in order for this to happen, women need support and encouragement both from the political parties and from their own families.

In this regard, the UN has also been actively promoting women’s leadership in politics and civil service by working with the National Commission for Women and Children to develop a National Action Plan on Gender Equality in Elected Office.

Since the establishment of RENEW in 2004, 4000 cases of gender-based violence have been recorded up to 2013. From a total of 400 walk-in cases, 98% comprised of women. Despite the awareness programmes conducted by various agencies, a huge number of cases go unreported. The National Health Survey 2012 also revealed that 74% of women accept domestic violence as justified.

The Minister of Health in his speech also stated “Recognizing these challenges, this International Women’s Day’s theme – “Make it happen is very appropriate”. It is an opportunity not only to recognize the progress and achievements made by our women and beyond, but also to chart a future for Bhutanese women through operationalization of the Domestic Violence Prevention Act 2013. This will go a long way in fulfilling the Millennium Development Goal 3 – to reduce gender inequality and empower women.”

In addition, the UN Resident Coordinator said, “Bhutan is not immune to the pervasive global problem of violence against women and girls. A study on the ‘Situation of violence against women in Bhutan’ by the National Commission for Women and Children states that about one in three women is likely to experience at least one act of violence during her lifetime. Domestic violence occurs in both rural and urban areas, and across all levels of education and wealth. It is even more upsetting that acceptance for domestic violence is higher among younger women. This has to change. We need to work together, and engage with men and boys to break the cycle of violence now.

Many agencies and individuals are already committed to ending violence against women in Bhutan. The Royal Government of Bhutan has shown its strong political will to reduce gender-based violence, both in the 11th Five Year Plan, and with the enactment of the Domestic Violence Prevention Act in 2013.”

The daylong programme in Bajo Higher Secondary School was attended by thousands of people including civil servants, students and representatives from donor agencies, organizations and the media.

The day was marked with a colorful cultural programme and a tokha (lunch) served to the general public by Her Majesty the Queen Mother.

In partnership with the Bhutan Football Federation, the UN System also launched Women’s Football Day. The UN is supporting this event in 18 districts, not only to promote healthy lifestyles, but also to increase girls’ self-esteem and to overcome gender stereotypes. 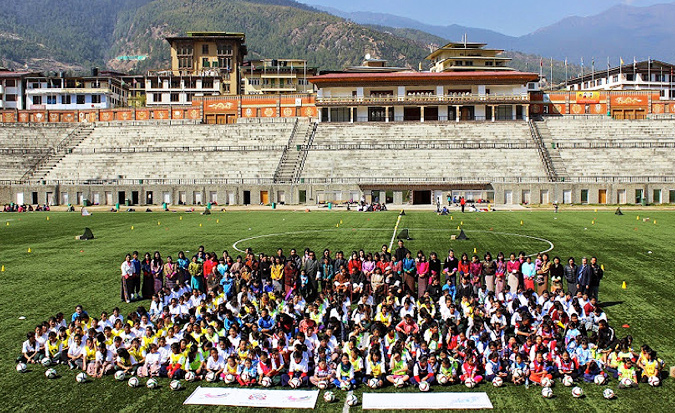 International Women’s Day was observed across the country with a series of events organized by the RENEW Volunteer Network. Currently, there are more than 2700 RENEW volunteers across the country who work towards preventing violence and supporting survivors. 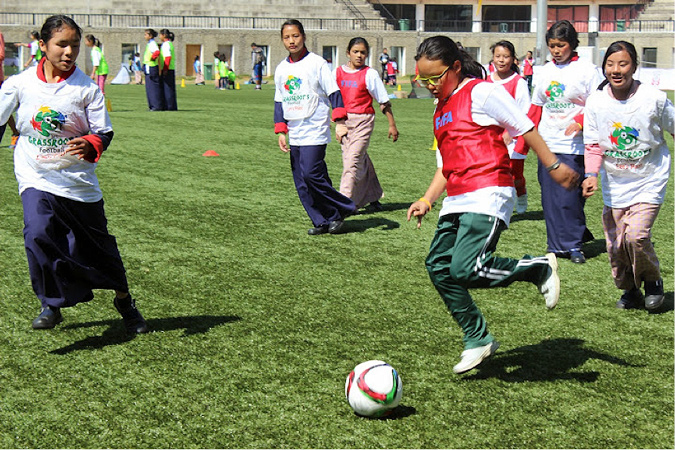 Founded by Her Majesty the Queen, Gyalyum Sangay Choden Wangchuck in 2004, RENEW is a non-governmental organization dedicated to the empowerment of women and girls in Bhutan, especially the victims and survivors of domestic violence.

Rinzi Pem is a National Coordinator at UNWomen Bhutan